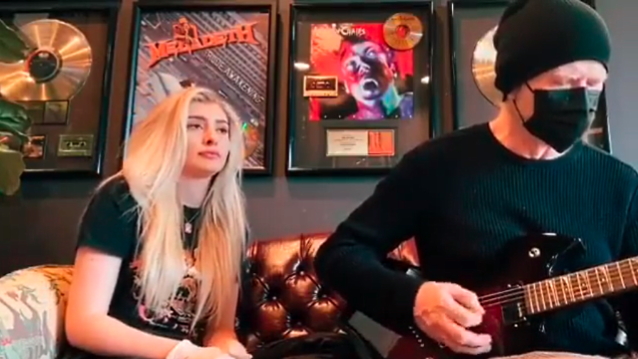 MEGADETH frontman Dave Mustaine and his 21-year-old daughter, Electra Mustaine, have posted their cover version of THE BEATLES classic "Come Together" as part of the Alzheimer's Association's "Music Moments" shareable movement. Check it out below.

In a message accompanying the video, Electra wrote: "Come together! Right now... QUARANTINE!

"Here's a lil' #MyMusicMoment with my dad, @davemustaine, someone who I'd never want to lose! THAT is why the Mustaine's stay home. We hope you do too! Wash your hands, practice social distancing, & stay healthy."

Earlier in the month, the Alzheimer's Association released "Music Moments", a collection of new recordings and unreleased tracks by award-winning artists honoring the personal, emotional connection between music and life's most important moments that we would never want to lose to Alzheimer's and all other dementia. "Music Moments" is available on all major streaming platforms now.

"Music Moments" is a multi-genre collection of powerful performances and heartfelt storytelling created to champion the fight for a world without Alzheimer's disease, and is available in two parts: a compilation album and behind-the-scenes video series. This unprecedented project is an effort to highlight how music marks the most important moments and people in our lives, while raising awareness for Alzheimer's disease and engaging the public in conversation to advance the cause.

In its efforts to raise concern and awareness of Alzheimer's disease and all other dementia, the Alzheimer's Association's "Music Moments" is a shareable movement that encourages listeners to share their own music moments with #MyMusicMoment on social media. Like these participating artists, by sharing their own stories and experiences with music, they will be a part of this important conversation.

Dave Mustaine's mother-in-law, 76-year-old Sally Estabrook, was in the "severe" stage of Alzheimer's disease when she was found dead in November 2014. Before her passing, she "couldn't put three words together," Dave told the 101 KGB radio station in San Diego.

"Come together! Right now... QUARANTINE! Here’s a lil’ #MyMusicMoment with my dad, @davemustaine, someone who I’d never want to lose! THAT is why the Mustaine’s stay home. We hope you do too!🖤🏡 🧼 Wash your hands, 😷 practice social distancing, 😊 & stay healthy." #repost | @electramustaine "The @alzassociation has put together a great compilation of music featuring award-winning artists, from Sting to Anthony Hamilton to Joan Jett to bring us all “virtually together” during this time. Music is medicine! Visit alz.org/MusicMoments to listen and watch the artists’ storytelling videos. Remember...we’re #InThisTogether!!"