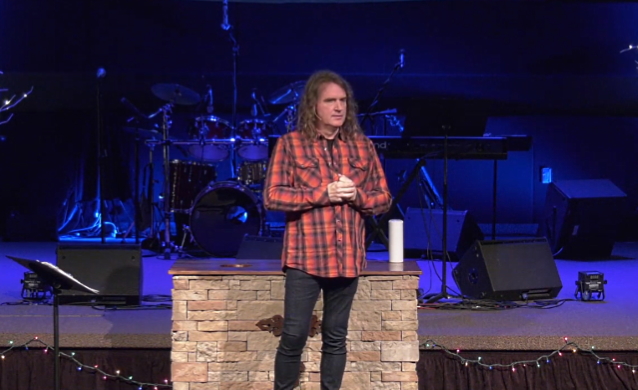 On December 30, MEGADETH bassist David Ellefson, a congregation member at Shepherd Of The Desert, a Lutheran Christian church in Scottsdale, Arizona, gave his testimony and challenge at the church's Mountain View campus as Pastor Alan Rosnau attended the funeral for his mother in California. Video footage of Ellefson's speech can be seen below.

Ellefson, who grew up attending Our Savior's Lutheran Church in Jackson, Minnesota, re-embraced his faith at the age of 25, after going through a 12-step recovery program. When Ellefson later settled down in Arizona, he started a contemporary worship service at a church in Scottsdale. He called it MEGA Life, partially a play on MEGADETH. In 2012, Ellefson began studying for the ministry through an extension program of Concordia Seminary in St. Louis.

In an October 2019 interview with Photo Groupie, Ellefson was asked why so many heavy metal musicians are Christians when the genre is often seen as the devil's music. He responded: "Well, to me, it's real simple: Christianity is just doing God's will and God's will is whatever 'to thy own self be true' you're wired to do. The good Lord, our creator, however you want to define Him, has given us each unique skills to play a certain role here in our time on Earth. I think that if you're living out what those skills and gifts are you, then you're doing God's will. To me, it's really that simple. I think religion has complicated that deeply, and I think that it has extra steps that aren't necessary. I think anyone of us can find our creator in moments of quiet and silence, and that's usually when we tap into that inner strength and inner resource. I've discovered that resource is ultimately God, because he's the creator of darkness. If I pick up a guitar, and as loud as it may or may not be, whatever comes out is probably God's will and gift for me."

Back in 2012, Ellefson told the Great Falls Tribute that MEGADETH had no plans to incorporate its Christianity into its songwriting. "You can be a person who has faith and be principled and have an obedience to your creator and not have everything you say or do be a praise and worship song," he said.

"The only reason we talk about [our faith] is because people ask us about it," he added. "The MEGADETH tour isn't some crusade. We're not on some mission."

Ellefson was in MEGADETH from the band's inception in 1983 to 2002, when the group briefly broke up because frontman Dave Mustaine suffered severe nerve damage that left him unable to play. After Mustaine reformed MEGADETH with an all-new lineup in 2004, Ellefson sued his former bandmate for $18.5 million, alleging that Mustaine still owed him substantial merchandise and publishing royalties. In January 2005, the case was dismissed in court, and five years later, Ellefson rejoined MEGADETH.

Mustaine spoke about "spirituality" during a 2016 interview, telling Honolulu, Hawaii radio host Dave Lawrence: "A lot of people believe that I'm into religion, because I had said that I had become a Christian. So let me just say that religion's for people who are afraid of going to hell, and spirituality's for people like me who've been there. And I say that there's a whole spirit world of stuff that… There's good and bad in everybody and in all things."

Those comments echoed what Mustaine said three years earlier in a chat with the Nashville Scene. He stated at the time: "I don't think that my faith has anything to do with my lyrics. I try and keep religion out of it. Frankly, for me, I don't believe in religion. I have a personal relationship with God and with Christ, and that's it. I don't push that on anybody; it's private. I kind of leave it there. Dave's [Ellefson] real open about it."