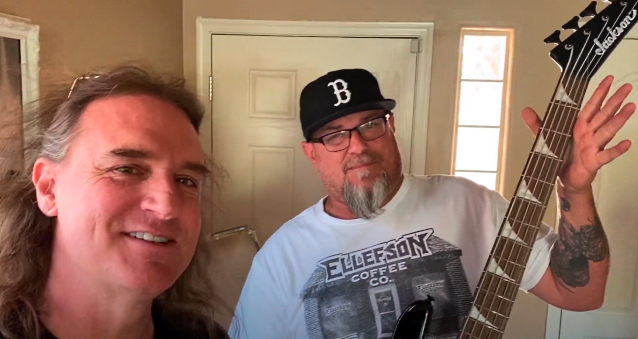 MEGADETH's David Ellefson recently auctioned off one of his "Rust In Peace" 30th-anniversary Jackson bass guitars for the David Ellefson Youth Music Foundation. After realizing that the the buyer lived in Tucson, Arizona, less than two hours away from Ellefson's home in Scottsdale, David decided to just drive down and deliver the instrument by hand. A short video documenting the exchange can be seen below.

An affiliate of the Grammy Music Education Coalition, the David Ellefson Youth Music Foundation was established in 2018 to raise funds for grants, scholarships and instruments, both for individual students, and school music programs. Now, in an effort to keep music students motivated while schools are closed during the pandemic, the foundation started the School's Out! initiative, which offers free, one-on-one Skype lessons to music students.

Earlier in the month, Ellefson's solo project, ELLEFSON, released its cover of the Post Malone track "Over Now". The track will appear on ELLEFSON's as-yet-untitled debut album, tentatively due in October.

ELLEFSON (the band) debuted on David Ellefson's 2019 compilation release "Sleeping Giants", a 2 LP/CD collection of B-sides and rarities, which first showcased the collaboration of Ellefson and vocalist Thom Hazaert (with contributions by Thal) on the tracks "Vultures", "Hammer (Comes Down)" and the title track, "Sleeping Giants", which featured guest vocals by legendary hip-hop MC Darryl "DMC" McDaniels.

ELLEFSON recently released a new single, "Simple Truth", with proceeds donated to the Italian Red Cross. "Simple Truth" was also made available as part of a Bandcamp-exclusive EP featuring a Max Norman (MEGADETH, OZZY OSBOURNE) remix of "Vultures", and live versions of "Vultures" and "If You Were God", recorded in Milan, Italy during David's 2019 "More Live With Deth" tour.