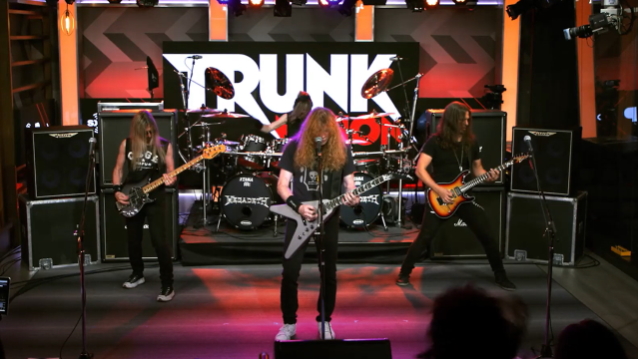 MEGADETH played three songs on the latest episode of SiriusXM's "Trunk Nation L.A. Invasion", which was taped on August 25 and premiered six days later on Faction Talk. Check out performance clips of "Holy Wars", "We'll Be Back" and "Symphony Of Destruction" below.

There had been speculation about DiGiorgio's involvement in the new MEGADETH LP since July 2021, based on a Cameo video Mustaine recorded in which he offered the first glimpse of the bassist that re-recorded David Ellefson's bass tracks on the latest MEGADETH effort.

In June, MEGADETH announced LoMenzo as a permanent member of the band. LoMenzo was MEGADETH's bass player in the mid-2000s and recently stepped back in as a touring member for "The Metal Tour Of The Year".

LoMenzo joined MEGADETH in 2006 and appeared on two of the group's studio albums, 2007's "United Abominations" and 2009's "Endgame". He was fired from the band in 2010 and replaced with returning original MEGADETH bassist Ellefson.