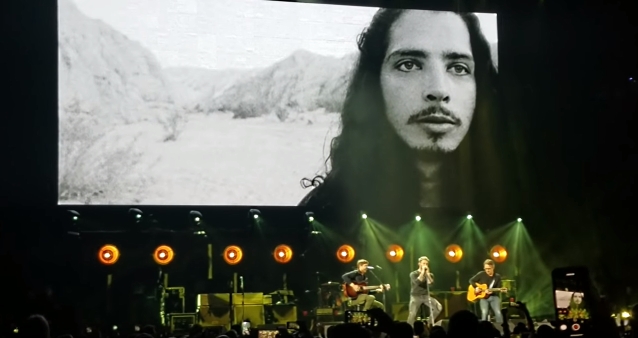 METALLICA and FOO FIGHTERS are among the artists that performed Wednesday night (January 16) at the Chris Cornell tribute concert at the Forum in Los Angeles, California. A number of pop stars also appeared at the event, billed as "I Am The Highway: A Tribute To Chris Cornell", such as Miley Cyrus, Brandi Carlile, Adam Levine, plus country artist Chris Stapleton and Ziggy Marley.

Rock artists that honored the singer included Josh Homme of QUEENS OF THE STONE AGE, Tim McIlrath of RISE AGAINST, Taylor Momsen from THE PRETTY RECKLESS, Perry Farrell of JANE'S ADDICTION, THE MELVINS, BLACK SABBATH's Geezer Butler and Ryan Adams, along with members of Cornell's bands SOUNDGARDEN, AUDIOSLAVE and TEMPLE OF THE DOG.

THE MELVINS opened the evening with a three-song set that included a cover of SOUNDGARDEN's "Spoonman", while the FOO FIGHTERS ran through SOUNDGARDEN's "No Attention", plus two songs previously covered by SOUNDGARDEN, DEVO's "Girl U Want" and CHEECH AND CHONG's "Earache My Eye", before closing the set with "Everlong".

Cyrus sang "As Hope and Promise Fade", before two of the surviving members of AUDIOSLAVE — guitarist Tom Morello and drummer Brad Wilk — played a five-song set with a rotating lineup of guest singers (Perry Farrell on "Cochise", Juliette Lewis on "Be Yourself", McIlrath on "Set It Off", Carlile on "Like A Stone" and Dave Grohl on "Show Me How To Live") and bassists (BLACK SABBATH's Geezer Butler, METALLICA's Robert Trujillo and JANE'S ADDICTION's Chris Chaney).

Introduced by comedian Jack Black, METALLICA opened its four-song set with a cover of SOUNDGARDEN's "All Your Lies", followed by two of its own classic tracks, "For Whom The Bell Tolls" and "Master Of Puppets", before closing with SOUNDGARDEN's "Head Injury".

Cornell's widow, Vicky, took to the stage to pay tribute to her husband.

"We all know how music can change us, but Chris did something more extraordinary — he changed music and paved the way for so many from Seattle to across the globe," she said. "And that legacy, and his influence, will live for generations to come. I am so proud that, along with his legacy, his philanthropic work continues to grow and flourish.

"Chris would be so very proud. Simply put, to me, and because of all of you, Chris lives on, a music immortal whose passion for helping others is more alive today than ever."

Chris's 14-year-old daughter Toni received a standing ovation after performing a cover of Bob Marley's "Redemption Song" while standing in front of a picture of her father.

"I Am The Highway: A Tribute To Chris Cornell" setlist:

TEMPLE OF THE DOG

Wow. @Miguel doing “Reach Down” with Matt Cameron is EVERYTHING right now. pic.twitter.com/iRqd5TqKJG