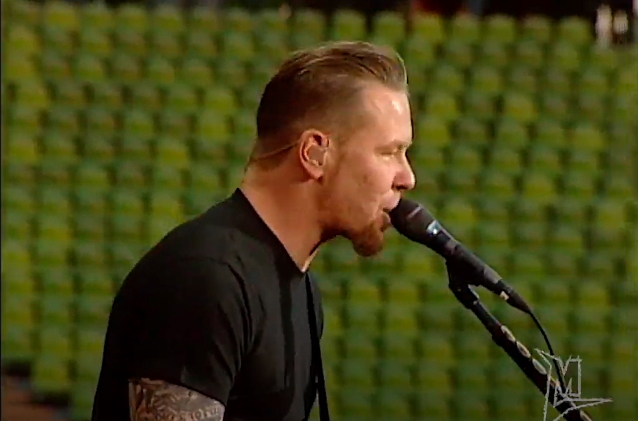 METALLICA has posted another video as part of its new concert series, "#MetallicaMondays", where the band is streaming a complete live show for fans on the group's YouTube channel and on Facebook every week. The latest concert to be shared was recorded on June 13, 2004 at Olympiastadion in Munich, Germany.

Earlier today, METALLICA confirmed its return to the stage for the first time since the September 2019 "S&M²" concerts that opened Chase Center in San Francisco. METALLICA will be the first rock band to be featured in the Encore Drive-In Nights series, with a full set showing August 29 at hundreds of drive-in and outdoor theaters across the United States and Canada. The show will be shot specially for the Encore Drive-In Nights Series at a location near the band's Northern California headquarters and will subsequently be edited and mixed by METALLICA's award-winning production team to the highest standards possible. The concert, the band's first show in nearly a year, will feature material from throughout their near-four-decade career and provide METALLICA fans with an intimate, unique and truly memorable concert experience.

Back in April, drummer Lars Ulrich revealed in an online chat that the band could get together to write and record a new album while in quarantine.