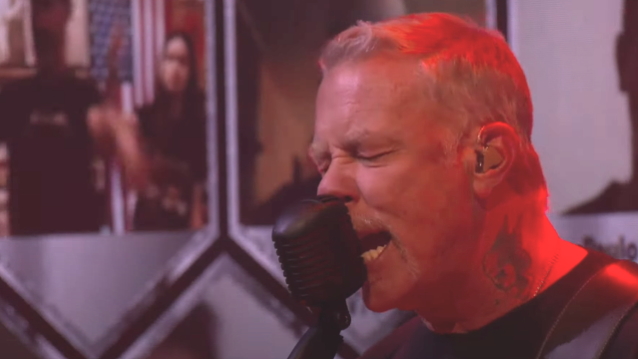 METALLICA played both unplugged and electric sets as part of its "Live & Acoustic From HQ: Helping Hands Concert & Auction", which was streamed live earlier today (Saturday, November 14) from the band's headquarters in San Rafael, California.

The acoustic portion saw James Hetfield, Lars Ulrich, Kirk Hammett and Robert Trujillo perform stripped down versions of METALLICA songs "Blackened", "Creeping Death", "The Unforgiven", "Now That We're Dead", "Nothing Else Matters" and "All Within My Hands", as well as covers of DEEP PURPLE's "When A Blind Man Cries" and Bob Seger's "Turn The Page". The electric set consisted of a reimagined version of "Disposable Heroes" — described by Hetfield as "a heavy song we did acoustic, and we're doing it heavy the acoustic-version way" — plus "Wasting My Hate" (performed for the first time since 2011),"For Whom The Bell Tolls", "Master Of Puppets" and "Enter Sandman", along with cover of the traditional folk classic "The House Of The Rising Sun".

"DEEP PURPLE was my first concert back in 1562," Ulrich remarked at the end of "When A Blind Man Cries". "Hearing James sing it was so fucking awesome. So thanks for indulging us."

Joining METALLICA at the event were mandolin player and multi-instrumentalist Avi Vinocur and keyboard player Henry Salvia. There was also a guest appearance from Hetfield's son Castor and Ulrich's son Layne, who added backing vocals and percussion to "All Within My Hands".

The reimagined version of "Disposable Heroes" can be seen beginning around the 7:30 mark in the second video below.

This was the second All Within My Hands foundation (AWMH) benefit held by METALLICA and this time around fans from all over the world were able to participate, as it was the band's first-ever worldwide pay-per-view event.

"METALLICA doesn't do anything halfway. This is an example of that," Hammett said of All Within My Hands prior to the start of the concert. "We've helped so many people through our music. Now we want to help in a different way."

09: Disposable Heroes
10. House Of The Rising Sun (traditional folk cover)
11. Wasting My Hate
12. For Whom The Bell Tolls
13. Master Of Puppets
14. Enter Sandman

All Within My Hands is a 501(c)3 non-profit foundation established in 2017 as a way for the METALLICA family to give back to communities that have supported the band. Just this year, AWMH has donated $645,000 to COVID-19-related relief funds including Feeding America, Direct Relief, as well as to charities assisting those in the entertainment and hospitality industries suddenly without work. More recently the foundation donated $350,000 to aid those affected by the West Coast wildfires. Finally, the foundation's Metallica Scholars Initiative is now in its second year, supported by a $1.5 million grant benefiting 15 community colleges across the country.

METALLICA and All Within My Hands are committed to running an organization of the highest integrity where expenses are kept to a minimum and are paid for entirely by the band, the board, and friends who have worked with the band over many years and are excited to help in this mission. As always, 100% of proceeds from this year's "Helping Hands" event — tickets, fees and auction items — will go directly to help those in need, with METALLICA and the foundation covering all production costs and expenses.