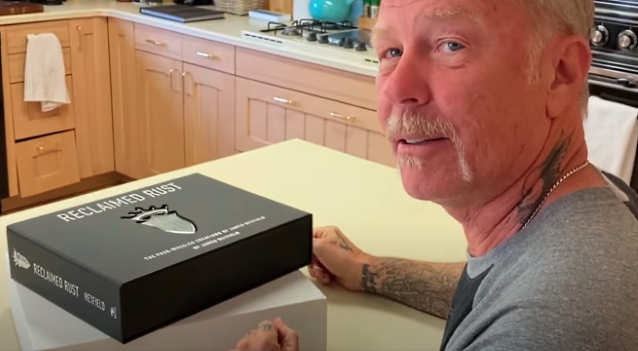 Insight Editions has set a July 28 release date for "Reclaimed Rust: The Four-Wheeled Creations Of James Hetfield". In the book, James Hetfield opens up his garage for an exclusive tour of the highlights of his incredible collection of restored and customized classic cars.

Millions know Hetfield as the frontman of METALLICA, but the acclaimed singer-songwriter has enjoyed another lifelong passion: restoring and customizing classic cars into magnificent pieces of automotive art. From cars such as the Skyscraper to the Aquarius and the Black Pearl, Hetfield's collection of beautifully reimagined classic automobiles is truly stunning. For the first time, Hetfield is opening up his garage and inviting readers to dive under the hood of some of these internationally lauded classics. Featuring dynamic, specially commissioned photography of the cars and insight from Hetfield into their creation, this book is a unique opportunity to learn about the METALLICA frontman's passion for creating bespoke classic cars.

"Reclaimed Rust: The Four-Wheeled Creations Of James Hetfield" standard-edition and limited-edition preview videos featuring Hetfield can be seen below.

As previously reported Hetfield has donated his collection of 10 highly regarded custom cars to the Petersen Automotive Museum. Additionally, James was named a Founding Member of the museum, an honor reserved for its most generous donors.

The Hetfield cars went on display this past February in the museum's Bruce Meyer Family Gallery. Along with the cars are artifacts and memorabilia from Hetfield and METALLICA's private collections.

A few years ago, Hetfield said that he approaches building hot rods the same way he approaches writing music. "Building cars is always an escape," he explained. "It's the same with music. I don't know what I’m gonna make. Cars are like people to me; they like love. They love to be touched, they love to be handled, they love to be driven... they love to be admired… This is a form of expression and freedom, and you can get away with driving something like that but still have your personality show through. It's just like looking at art. You look at a piece and you go, 'I don't get it.' And you look at something else and say, 'That is amazing. I wish I thought of that.'"