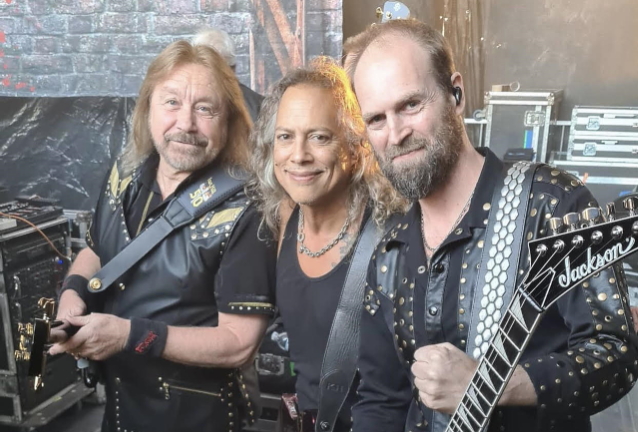 METALLICA guitarist Kirk Hammett joined JUDAS PRIEST on stage last night (Sunday, September 26) at the Louder Than Life festival in Louisville, Kentucky to perform "The Green Manalishi (With The Two Pronged Crown)", a song written by Peter Green and recorded by FLEETWOOD MAC. For the performance, Kirk used his Gibson 1959 Les Paul Standard that once belonged to the immortal genius of both Green and Gary Moore — affectionately known and celebrated worldwide as "Greeny."

Fan-filmed video footage of Kirk's appearance can be seen below. Also available is a backstage photo courtesy of PRIEST's guitar tech Robb Philpotts.

In 2019, METALLICA played a snippet of PRIEST's version of "The Green Manalishi (With The Two Pronged Crown)" while rehearsing for its concert in Bucharest, Romania.

Last year, Halford told Revolver magazine that METALLICA was the last concert he went to see as a fan before the pandemic hit. "I [saw them] play in Glendale, in Arizona," he said. "That was a blast. I've known those guys forever. I went with my other half, Thomas, and a good friend of ours who's a police lieutenant, James.

"It was great to see the band because if you, by the grace of God and good luck and fortune and hard work and slugging at it, you get to all these different levels, and METALLICA went about as far as you can, and still are at.

"Their shows are gigantic. If you've seen 'em — they're big production. And it must be a nightmare for them, like it is for us, to try and pick a setlist. But their setlist was a combination of the ones that we wanna hear, plus the new stuff that you do. It was a great show."