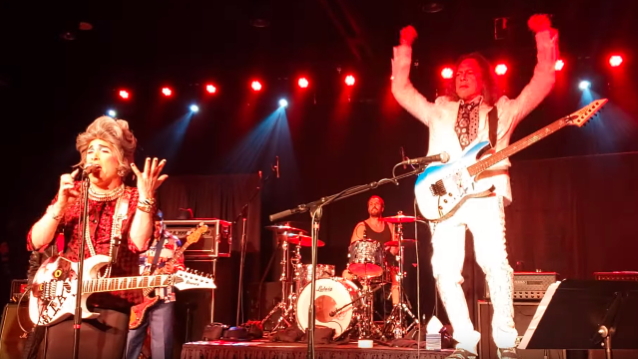 The seven-minute battle was introduced by Gibson's Mark Agnesi, who arranged the event during an interview with Mrs. Smith, and saw Hammett and Mrs. Smith trading licks over a reimagining of Isaac Hayes's Oscar-winning "Theme From Shaft", the original recording of which became infamous for the mind-blowing wah-wah guitar of the late Charles "Skip" Pitts.

In the end, Hammett conceded that he had "just been out-wah'd," proclaiming, "A moment in history has just occurred."

Mrs. Smith received a gold Cry Baby plaque certifying her position as "the new undisputed champion of the overuse of the Cry Baby wah-wah pedal," after which she told Hammett: "I learned it all from watching you."

It was in January 2019 that Mrs. Smith first threw down a gauntlet before Hammett, saying in an interview with "The Mark Agnesi Show": "I'm the number-one wah-wah abuser. I abuse the wah more than Kirk Hammett and I've challenged him multiple times to a wah-off. Why are you hiding behind your wah-wah pedal, Kirk Hammett?"

Legendary guitarist Joe Satriani, who famously gave guitar lessons to Hammett in the 1980s, had voiced his support for Mrs. Smith, telling Rolling Stone: "This is the crux of what makes Mrs. Smith so funny: There's this woman, who doesn't look right, who's doing this stuff in the wrong place, in a cabaret or on a street corner and yet is out-shredding the person who is totally dedicated to shredding, who's got the pants and the hair and the right amp and the pointy guitar."

"To me, the wah-wah is a lot like the human voice," he said. "It isn't so much about the 'wah-wah' sound, it's being able to manipulate the tone however I feel it in that moment. It actually creates a better connection to the deeper part of me. And [Jimi] Hendrix wasn't actually the first person I heard use a wah-wah pedal — that was Brian Robertson from THIN LIZZY." Recalling that life-changing moment, he went on: "The first time I became aware of it was the song 'Warriors' on 'Jailbreak'. He comes in with this totally wah-ed out two-three notes, and I said to my friend, 'What is that?!' He said, 'That's a wah-wah pedal.' 'Wow, fantastic!' I made a mental note of that…"