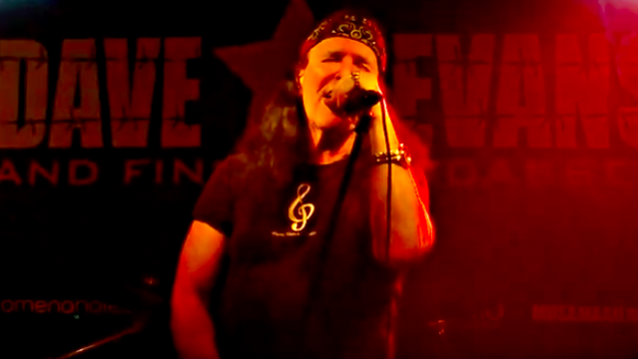 Fan-filmed video footage of original AC/DC singer Dave Evans performing several of the band's classic songs on July 1 at On The Rocks in Helsinki, Finland can be seen below.

Evans recently said that he would have returned to the band if he had been asked to step in for Brian Johnson on the Australian group's European tour.

AC/DC postponed the last ten dates of its North American trek after doctors told Johnson he faced a total loss of hearing if he did not stop touring immediately. AC/DC has since resumed its tour with GUNS N' ROSES frontman Axl Rose as a "guest vocalist," with Johnson apparently not returning to the group.

Asked by Finland's Kaaos TV if he would have done the recent European shows with AC/DC if he had been asked to rejoin the group, Evans said: "Well, it depends how much they wanna pay me? [Laughs] You know, I'm busy. But, yeah, it depends on money, mate. If they wanted to pay me enough money, of course I'd do it. You'd do it too, if they asked you. But, yeah, of course."

Earlier in the year, Evans had kind words for Johnson, who admitted in a 2014 interview that his hearing loss wasn't due to playing loud rock music every night for a living but was the result of Johnson's other obsession: auto racing.

"A lot of people make jokes about going deaf from listening to loud music," Evans told The Sydney Morning Herald back in March. "It's never been a problem for me.

"I just thought it was sad news. It's your lifeblood as a singer, live performances are so personal, without the crowd and the adrenaline, it's going to be hard for him. Performances are the big highs in our lives."

Evans added that his return to AC/DC would probably never happen. But, he said, "it would be nice to do one guest performance. [Former members] were all part of the band no matters what era they were from."