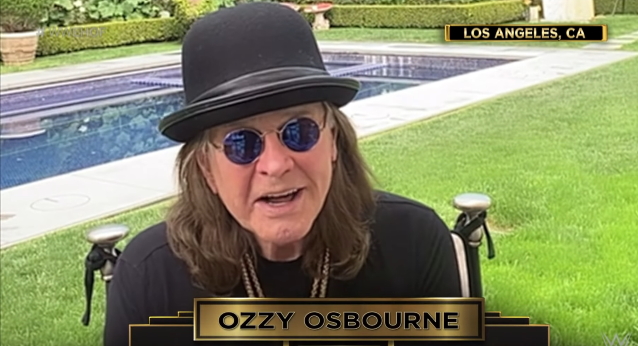 Watch OZZY OSBOURNE Get Inducted Into 'WWE Hall Of Fame'

Ozzy Osbourne was inducted into the WWE Hall Of Fame Tuesday night (April 6).

Osbourne was an unannounced addition of the combined 2020/2021 WWE Hall Of Fame ceremony, which was taped last week.

Although the legendary heavy metal singer was not present to accept the honor, he did tape a video message that was aired as part of the show.

"Thank you so much WWE Universe for this award," Ozzy said in the video. "I don't deserve it, but thank you anyway."

"I wanna thank Vince McMahon and Triple H. Thank you very much, God bless you."

Osbourne has made several appearances on WWE TV over the years, including at WrestleMania 2 where he joined Captain Lou Albano to manage The British Bulldogs in their WWF tag team championship win over Brutus Beefcake and Greg Valentine. Osbourne also performed live at a SmackDown taping in Baltimore in May 2007, and later served as a special guest host for Raw in November 2009.

The WWE Hall Of Fame 2020 and 2021 induction ceremonies were taped in Florida on Tuesday and Wednesday of last week, and the edited version aired last night on Peacock in the United States and on WWE Network around the world.

Ozzy, who turned 72 in December, recently got the COVID-19 vaccine.

In November, Ozzy told GQ magazine that he suffers from a respiratory disease which puts him at an increased risk of severe pneumonia and poor outcomes if he was to develop COVID-19.

Last July, Ozzy said that he was still "not back to 100 percent" after suffering from several medical issues in 2019, including a fall, neck surgery and hospitalization for the flu. Ozzy also said that he was looking forward to performing again once he has regained his health and the coronavirus pandemic has subsided.

When the pandemic struck, Ozzy had just released his first solo album in a decade, "Ordinary Man", which he recorded in late 2019 while recovering from surgery and related illnesses. The BLACK SABBATH singer had previously canceled all his 2019 tour plans, and the rescheduled 2020 shows were also scrapped.