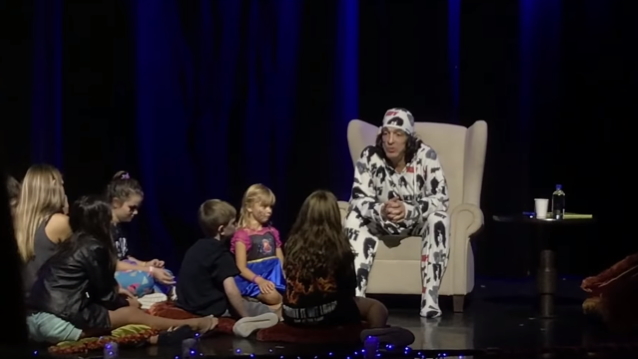 On the final night of "Kiss Kruise IX", KISS's official cruise, Paul Stanley came onstage in his pajamas to answer questions from the children on board, share some Looney Tunes cartoons and read a special, kid-friendly bedtime story.

According to Rock And Roll Garage, the chat revolved around a variety of KISS-related topics, and often the subjects were brought up by the children themselves. The boys, for example, asked why drummer Peter Criss left the band and commented on Eric Carr, also a drummer, who died in 1991.

Video footage of the Bedtime Stories With Paul Stanley" event can be seen below (courtesy of YouTube user "Rock And Roll Experience With Mike Brunn").

This year's "Kiss Kruise" took place aboard Norwegian Pearl, which set sail October 30 from Miami, Florida and traveled to Great Stirrup Cay, Bahamas and Falmouth, Jamaica before returning to Miami.

Last weekend, KISS announced 75 new shows as part of its "End Of The Road" farewell tour, including what it says will be its last show ever, set to take place in New York City on July 17, 2021.