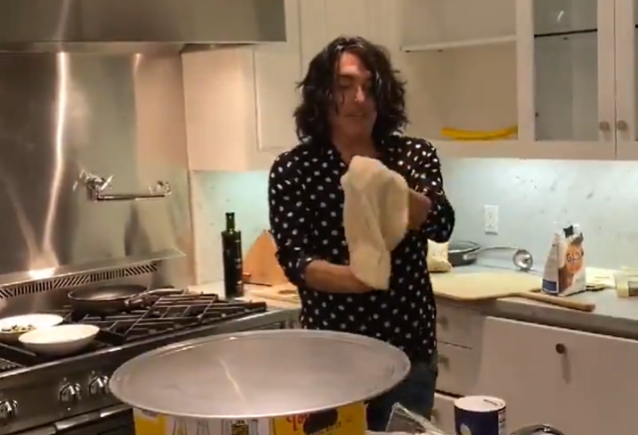 KISS frontman Paul Stanley once again demonstrated his cooking chops in the kitchen overseeing "cruisers" aboard this year's Kiss Kruise. The ship departed from New Orleans on October 29 for a five-day journey that took participants from Miami to Harvest Caye, Belize and Roatan, Honduras aboard Norwegian Jewel. Check out video footage below (courtesy of Mike Brunn).

This past June, Stanley, who frequently uses social media to share photos of his culinary creations, was asked in an interview with Germany's Radio Bob! if he has any plans to eventually release a cookbook. He responded: "Maybe at some point, but right now that cookbook would be very thin. If I were to collaborate with some of my friends who are chefs and whatever, I'd love to do a cookbook at some point."

He continued: "It's a lot of fun and very gratifying to sit and eat something that you made that's actually good. I think at some point most of us have cooked something and gone, 'Woah. That's awful.' But when you cook something and you go, 'Wow. If I got this in a restaurant, I'd go back to that restaurant,' that's good.

"So, would I love to do a cookbook? Yeah," Paul added. "Right now it wouldn't have many pages. So I'm gonna wait a little while."

Back in 2014, Stanley demonstrated his home-cooking skills during an appearance on an episode of "Home & Family" on the Hallmark channel. Stanley showed off his culinary expertise in the kitchen with co-host Cristina Ferrare when they made his recipe for chicken marinade and Brussels sprouts.