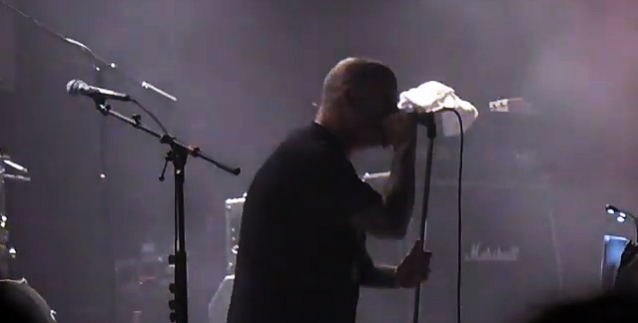 Fan-filmed video footage of Philip Anselmo performing a cover of BATHORY's "Massacre" with his SCOUR project on May 25 at Maryland Deathfest at Ram's Head Live in Baltimore, Maryland can be seen below.

In a recent interview with Damnation Vault, Anselmo stated about his love for early black metal: "I let it be known that black metal as a genre didn't happen until 1991. Bands like BATHORY, they were considered back in the day, they were just 'VENOM clones.' CELTIC FROST was called avant garde heavy metal. Yeah, so black metal really wasn't a genre specifically until '91 and then, as far as I'm concerned, I know MAYHEM was probably one of the first, but the band that probably really put it all on the map was DARKTHRONE for me. They got that imagery and art. Black metal artwork over last couple decades always have been grim and great; I love it. It's bleak, super bleak, man. I love it, I really do. Great imagery, great imagery. And yeah, DARKTHRONE, absolutely utilize that imagery to a some bizarre perfection, man. The way they stuck there.. I guess the whole package that DARKTHRONE intrigued a lot of people, whether it be the title of the band, or the name of the band, or the cover of the records. You know, it was intriguing."

"Red" was recorded at Anselmo's Nodferatu's Lair with Steve Berrigan (DOWN, PHILIP H. ANSELMO & THE ILLEGALS, EYEHATEGOD, HAARP, CLASSHOLE) at the helm. The record was once again mixed and mastered by Dave Otero (CEPHALIC CARNAGE, CATTLE DECAPITATION, COBALT, KHEMMIS) at Flatline Audio.