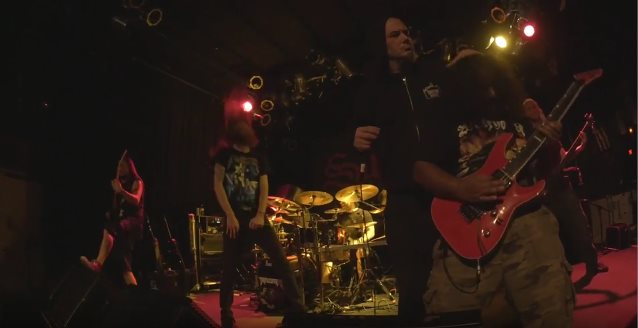 Former PANTERA and current SUPERJOINT and DOWN frontman Philip Anselmo joined BATTLECROSS on stage on February 3 at Vinyl Music Hall in Pensacola, Florida to perform the PANTERA classic "Fucking Hostile". Fan-filmed video footage of his appearance can be seen below.

BATTLECROSS had performed "Fucking Hostile" a number of times in the past and even released a studio version of its rendition of the song as a bonus track on its 2013 album "War Of Will".

The original version of "Fucking Hostile" is featured on PANTERA's classic 1992 record "Vulgar Display Of Power", a landmark album widely acknowledged as one of metal's most enduring and influential masterworks. Recorded by Anselmo, guitarist "Dimebag" Darrell Abbott, bassist Rex Brown and drummer Vinnie Paul Abbott, the album has been certified double platinum by the RIAA and features several of the group's most iconic songs including "Walk", "Mouth For War" and "This Love".

In a 2013 interview with Vanyaland, Anselmo stated about PANTERA: "The legacy of PANTERA stands pretty firmly on its own. I don't really dwell on the negative things within PANTERA. To me, PANTERA is about a whole lot more than the breakup; when I think of PANTERA I think of really, really awesome times and great, great, great things and fantastic brotherhood and camaraderie. If you take a look around, there are a lot of bands out there that have experienced similar tragedy and breakup and all the things that happen. We are not the first band to have troubles or tragedy."