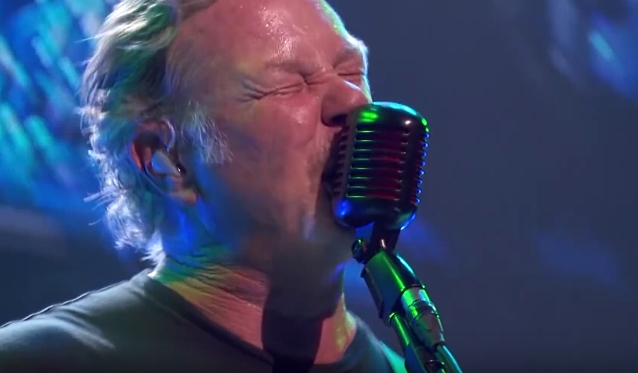 Professionally filmed video footage of METALLICA performing a cover version of SOUNDGARDEN's "Head Injury" at the Chris Cornell tribute concert January 16 at the Forum in Los Angeles, California can be seen below.

Introduced by comedian Jack Black, METALLICA's four-song set also included two of its own classic tracks, "For Whom The Bell Tolls" and "Master Of Puppets", as well as SOUNDGARDEN's "All Your Lies".

A number of pop stars also appeared at the event, billed as "I Am The Highway: A Tribute To Chris Cornell", such as Miley Cyrus, Brandi Carlile, Adam Levine, plus country artist Chris Stapleton and Ziggy Marley.

Rock artists that honored the singer included FOO FIGHTERS, Josh Homme of QUEENS OF THE STONE AGE, Tim McIlrath of RISE AGAINST, Taylor Momsen from THE PRETTY RECKLESS, Perry Farrell of JANE'S ADDICTION, THE MELVINS, BLACK SABBATH's Geezer Butler and Ryan Adams, along with members of Cornell's bands SOUNDGARDEN, AUDIOSLAVE and TEMPLE OF THE DOG.