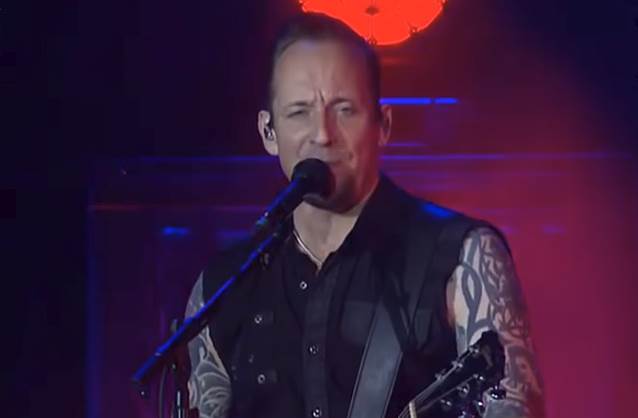 Danish/American rock 'n' rollers VOLBEAT played a new song called "The Everlasting" during their June 23 set at the Graspop Metal Meeting in Dessel, Belgium. Professionally video footage of the performance can be seen below.

Prior to launching into the track, frontman Michael Poulsen told the crowd: "We've been home for a half year. I just got my first baby child. And besides that, we've been working on a lot of new songs, because next year we wanna bring out a new album for you guys and ladies. And we wanna play a new song for you, okay? You wanna hear a new song. The song is called 'The Everlasting', and you will like it."

VOLBEAT debuted "The Everlasting" in New Jersey last July and has performed it live a number of times since then.

VOLBEAT drummer Jon Larsen told Metal Wani that he and his bandmates have been working on material for a new album since they finished last summer's stadium tour with METALLICA and before embarking on their current European festival run. He said: "After the last European run, which ended in September of last year, we kind of took a couple of weeks off, did the ALTER BRIDGE thing in the U.K., and then we basically went into the rehearsal room and have been there ever since — until a couple of months ago when we did a small South American run and then we went back into the rehearsal room. And now we're back out doing the final shows on the summer run. And after that, we're heading straight back into the rehearsal room. But Michael writes at home always. He has a tape recorder, he has a guitar — he's basically spending every day sitting at home coming up with stuff, going through stuff that he may already have written. We meet up twice a week in the rehearsal room for a couple of hours and sort out ideas, start working on new stuff."

Asked about the musical direction of the new VOLBEAT material, Larsen said: "It's VOLBEAT — pure and simple. For me, it's kind of hard to say what it's gonna sound like, because once we go into the studio, things might change anyway. Sometimes you will have an idea where you kind of go, 'Oh, this is gonna be the biggest thing ever,' and once you record it, you go, 'Oh, I guess it wasn't.' And then other songs where you kind of maybe think, 'Oh, it's maybe more of a throwaway or a B-side,' or something, and it ends up being one of the best songs on the album. That happened on the last album, actually. The song 'Let It Burn', we thought it was kind of like a B-side maybe type of thing — we really weren't paying that much attention [to it] — but once it was recorded, it was, like, 'No. This is not a B-side. This is definitely gonna be on the album for sure.' So a lot of things can happen."

VOLBEAT's next LP will follow up 2016's "Seal The Deal & Let’s Boogie" and will be the band's first full-length effort to feature bassist Kaspar Boye Larsen.

VOLBEAT is currently on a run of European festivals that will last through late July. The band does not have any North American dates on its current schedule.