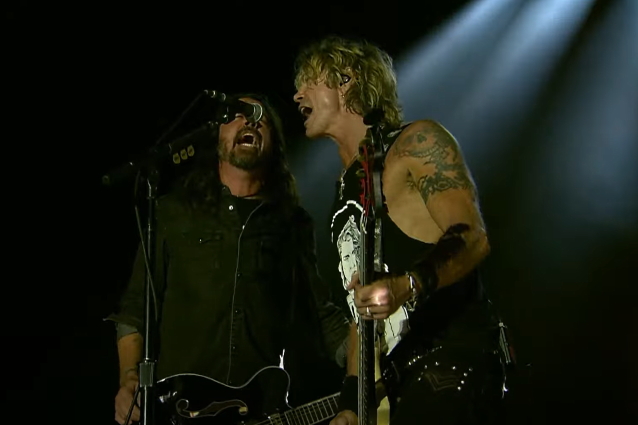 Professionally filmed video footage of GUNS N' ROSES performing the song "Paradise City" on September 4 at the BottleRock Napa Valley festival can be viewed below.

The Axl Rose-fronted outfit was joined for the final track of its two-and-a-hour set by special guest Dave Grohl of the FOO FIGHTERS.

According to San Francisco Chronicle's Datebook, the performance was cut short by festival promoters after GUNS N' ROSES bumped up against the festival's hard 10 p.m. curfew.

A wave of boos from the crowd could be heard as the musicians tried to complete the track, with GUNS N' ROSES and Grohl continuing to play through 10:03 p.m. Following the performance, singer Axl Rose threw his mike off stage, took a bow and walked off with the rest of the band trailing behind.

Located in a residential area, with houses that face the main stage, the curfew at the Napa Valley Expo was set when neighbors complained about the noise after BottleRock's inaugural year in 2013.

BottleRock organizer Dave Graham said in a 2017 radio interview after cutting the FOO FIGHTERS' set short: "I was responsible for making sure that we ended at 10 and it pained me to have to do that. I would have happily paid a big fine to keep them playing. It's less about the money and it's more about the trust within the community and the credibility that our festival has within the community."

Prior to a partial reunion of GUNS N' ROSES' classic lineup in 2016, the band had a reputation for extreme tardiness but has since become unexpectedly punctual. Rose and his bandmates took the stage at about 7:30 p.m. at BottleRock.

Dubbed "We're F'N Back!", GUNS N' ROSES' current tour comes on the heels of the "Not In This Lifetime" run that began in April 2016 and became the No. 3 highest-grossing tour in the history of Billboard Boxscore.

The massive touring production will wrap up with two shows in Hollywood, Florida, at the Hard Rock Live Arena on October 2 and October 3.

On August 6, GUNS N' ROSES officially released a new song called "Absurd" across all digital music providers. The studio version of "Absurd" — which is a reworked version of a previously unreleased GN'R track called "Silkworms" — arrived three days after the band performed the tune live for the first time during its concert at Boston's Fenway Park.