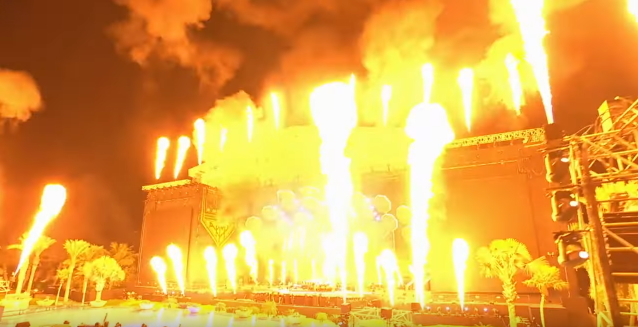 KISS has uploaded a 30-second video of "pyro highlights" from the band's New Year's Eve performance in Dubai, United Arab Emirates. Check it out below.

"I can reveal that you achieved a grand total of 73," a Guinness representative told the band about the number of projections launched. "You are officially amazing." As for the height of the flame projections, the new benchmark is now "35 meters."

Landmarks Live Presents produced the $10 million spectacular, which was filmed with more than 50 4K cameras and 360-degree views and was held on a massive 250-foot stage at The Royal Beach at Atlantis. The show included "a million dollars' worth of pyro," according to frontman Paul Stanley.

KISS partnered with event company Tixr to beam the "Kiss 2020 Goodbye" show around the world.

KISS bassist/vocalist Gene Simmons told The Oakland Press about the band's decision to play the Dubai concert: "We get offers all the time, thank goodness, and we've been saying no to everybody because it's just not safe — for us, for the fans. With this, we happened to be in the right place at the right time, and it all make sense. The folks in Dubai, which is a fascinating place, suggested something crazy and said, 'You can do anything you want here, no restrictions.' And we said, 'Wait a minute. You mean we can put on the biggest pyro show of all time, since Krakatoa and the Big Bang? You mean we're gonna be safe going over there?' They said 'yeah,' so there you are."

"I worked with KISS back in 2005 and I wanted to have a crack at doing a bigger show with them," he said. "Somehow, I developed a reputation of producing challenging shows, whether doing one with Andrea Bocelli at Palazzo Vecchio, the FOO FIGHTERS at the Acropolis or pulling off the biggest show of the year in the middle of a pandemic. Hosting the KISS show in Dubai was a logical step. The United Arab Emirates is among the world leaders in mitigating the spread of COVID and continues to effectively manage the pandemic given the government’s extraordinary response measures. It [made] sense for us to bring Landmarks Live to the UAE."

Catullo went on to say that working with KISS has been "a dream come true" for him. "To be able to capture them in such an explosive and record-breaking way will certainly be a highlight of my career," he said. "Logistically, this was the largest undertaking I've ever done, and during a pandemic made it all the more challenging. Our crew is comprised of over 400 people, most of whom are based in Dubai. It has been a very complex show to put together: almost five months of planning, hundreds of working crew, coordination with the Dubai government, major coordination with the band; this show will go down in the record books. We're also filming a documentary on how we are pulling this show off. We're doing the biggest production in KISS's history.

"The most arduous task has been developing a safe COVID compliance protocol amid the pandemic to ensure no virus transmission among the crew. The crew will essentially create a bubble for the show setup, particularly the few staffers who will be in direct contact with KISS. American Hospital is conducting daily testing. We have to take beyond-extraordinary measures to keep people safe."