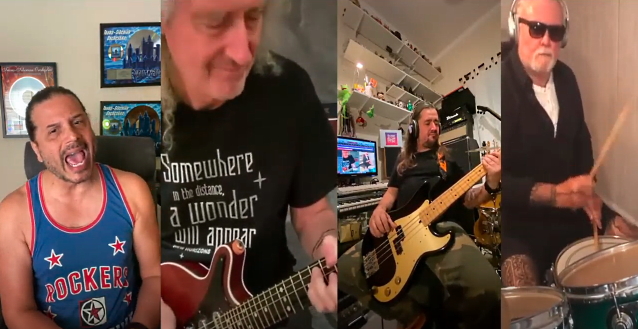 SONS OF APOLLO singer Jeff Scott Soto and Brazilian bassist Kuky Sanchez joined QUEEN legends Brian May and Roger Taylor from their respective homes to perform a split-screen version of QUEEN's classic song "We Are The Champions". Check out the video below.

Soto was one of the vocalists for the officially sanctioned QUEEN tribute QUEEN EXTRAVAGANZA. Launched in 2012, QUEEN EXTRAVAGANZA was put together by Taylor, who, along with May, has been tasked with the duty of preserving the legacy of QUEEN for the past 29 years after the passing of singer Freddie Mercury in 1991.

In a 2019 interview with "The Blairing Out With Eric Blair Show", Soto was asked to name two of his favorite QUEEN songs. Jeff laughed and said: "God, you're kidding me. I go deep when it comes to QUEEN, because I am an über fan. I am a B-sides über fan of QUEEN. So I would never choose the obvious; I'd never choose the hits. I go deep. I like when QUEEN goes a little goofy, a little wacky, novelty, nostalgic. When they go… like the 'Bicycle Race' and 'Good Old-Fashioned Lover Boy' — when they get crazy with all the harmonies and all that lushness behind it. That's the QUEEN I love… Most people think I'm just a hard rock, heavy metal screamer. They don't realize that I'm into the really sultry 'You Take My Breath Away', 'Love Of My Life' kind of stuff. I mean, that's the kind of stuff that's in my blood, in my DNA. [When it comes to] my voice and being able to do [sing] many different things, I got all that from Steve Perry and Freddie Mercury."

May has been spending some of his time in quarantine giving guitar lessons on Instagram, offering detailed tutorials on how to play some of QUEEN's greatest hits. Taylor, meanwhile, has been entertaining fans while in lockdown by giving drum lessons to beginners by going through different sections of the percussion instruments each day on his Instagram account.

The 2020 tour was due to start in Italy on May 24, with the itinerary also including a massive run of 10 London O2 concerts as well as a pair of shows each in Manchester and Birmingham, before further mainland Europe dates were set to conclude with two Madrid shows on July 7 and July 8.