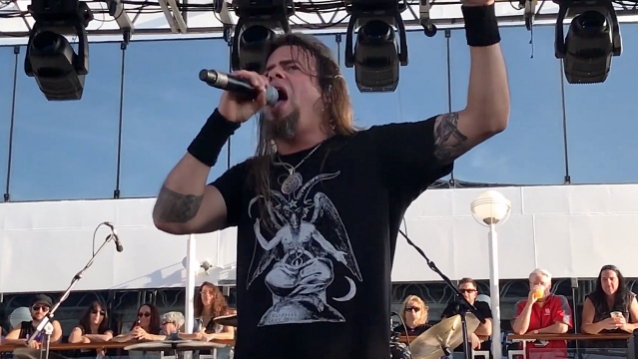 Fan-filmed video footage of QUEENSRŸCHE's performance aboard the inaugural Megacruise can be seen below (courtesy of YouTube user "alexvigil29").

Megacruise, hosted by metal veterans MEGADETH, departed from Los Angeles on October 13 on a round-trip voyage to San Diego and Ensenada, Mexico and returned on October 18. The at-sea music experience featured additional performances from ANTHRAX, LAMB OF GOD, SUICIDAL TENDENCIES, DEATH ANGEL, TESTAMENT, DRAGONFORCE, OVERKILL and CORROSION OF CONFORMITY, among others.

QUEENSRŸCHE is continuing to tour in support of its latest album, "The Verdict", which was released in March via Century Media Records. The disc was produced, mixed, and mastered by Chris "Zeuss" Harris (ROB ZOMBIE, ICED EARTH, HATEBREED) at Uberbeatz in Lynwood, Washington; Planet-Z in Wilbraham, Massachusetts; and Watershed Studio in Seattle, Washington.