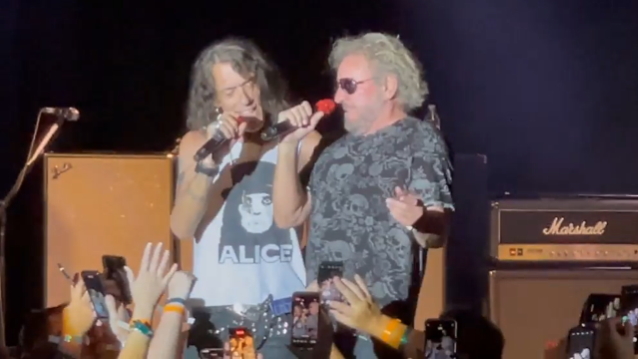 RATT singer Stephen Pearcy joined Sammy Hagar and THE CIRCLE on stage last night (Friday, October 29) during the opening night of the Red Rocker's Las Vegas residency at The STRAT to perform a cover of the LED ZEPPELIN classic "Rock And Roll". Fan-filmed video of his appearance can be seen below.

Pearcy took to his Instagram after the concert to share a few onstage and backstage photos of him with Hagar and other members of THE CIRCLE, and he wrote in an accompanying message: "Great hanging with @mad_anthony_bassman @sammyhagar and band tonight with my beautiful @misstruthadare great jamming, appreciate Sammy. The band sounded great first night of his residence in Vegas."

"Sammy & Friends" celebrates Hagar's career, spanning four decades, from his solo career, MONTROSE, VAN HALEN, CHICKENFOOT, THE CIRCLE, and surprise additions to the setlist depending on which of his musician friends take the stage with him. Produced by industry leader SPI Entertainment and Hagar's manager, Tom Consolo, of TC Management, the show transports the audience to Baja, where you never know who will join Hagar on stage.

According to the Las Vegas Review-Journal, Hagar has invited such guest stars as Toby Keith, Rick Springfield, Kenny Chesney, Vince Neil (MÖTLEY CRÜE) and Jerry Cantrell (ALICE IN CHAINS) to the party.

Sammy Hagar with special guest Stephen Pearcy from heavy metal band Ratt joining him on the Led Zeppelin classic “ Rock n Roll”followed up by “There’s only one way to rock ”.