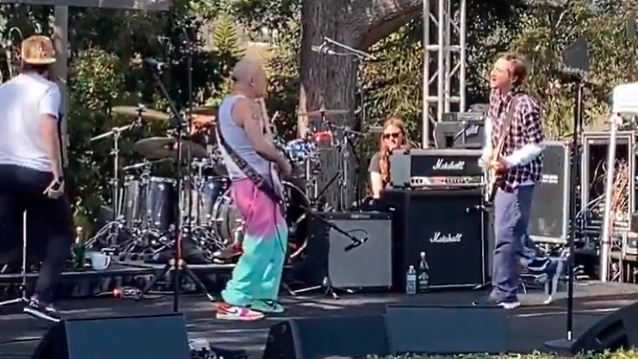 RED HOT CHILI PEPPERS performed live with guitarist John Frusciante for the first time in more than 12 years on Saturday (February 8) in Los Angeles at a memorial for Andrew Burkle, an aspiring film producer and son of billionaire Ron Burkle. The event, which was organized by the Tony Hawk Foundation, also included a performance by JANE'S ADDICTION, which features former CHILI PEPPERS guitarist Dave Navarro.

Hawk wrote on Instagram: " Today we celebrated the life of Andrew Burkle. He was a beloved son, friend and brother to the lucky ones that surrounded him. Because of him, @tonyhawkfoundation had landmark fundraising events in Beverly Hills for 10 years in a row and I am forever grateful for his support in our mission.

"Thank you to the Burkle family for including us in your celebration of Andrew. His passion for life was contagious, and his spirit lives on through our work. A perfect example of Andrew's magnetism was displayed this afternoon when this all-star lineup came together to perform Iggy Pop and GANG OF FOUR (and RHCP) songs in his honor. Thank you Andrew, we will miss you beyond words."

Frusciante rejoined RED HOT CHILI PEPPERS in December after the dismissal of Josh Klinghoffer, who had been in the band for 10 years.

Drummer Chad Smith recently revealed that the PEPPERS have begun working on new material with Frusciante.

Thank you to the Burkle family for including us in your celebration of Andrew. His passion for life was contagious & his spirit lives on through our work at @THF.
A good example of Andrew’s magnetism was on display when this all-star lineup came together to play Iggy Pop #acbroxpic.twitter.com/8F3WjGT8K7