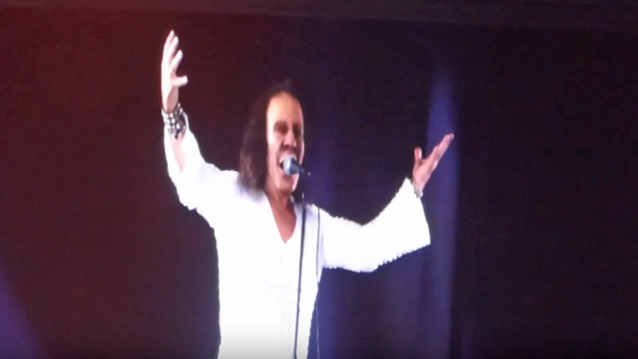 "Dio Returns: The World Tour" — featuring Ronnie James Dio reuniting via hologram with his DIO bandmates — played its ninth show last night (Wednesday, December 20) at Poppodium 013 in Tilburg, Netherlands. The Ronnie hologram performed throughout the show, treating fans to an alternating setlist that featured songs such as "Rainbow In The Dark", "King Of Rock And Roll", "Man On The Silver Mountain", "Heaven And Hell", "Holy Diver" and more.

Fan-filmed video footage of the Tilburg concert can be seen below.

"Dio Returns: The World Tour" will hit Belgium before the end of 2017. In 2018, the trek will make stops throughout Scandinavia, Argentina, Australia, Brazil, Canada, Chile, Colombia, Ecuador, France, Germany, Japan, Mexico, New Zealand, United States, Venezuela and other countries, with many more dates to be announced.