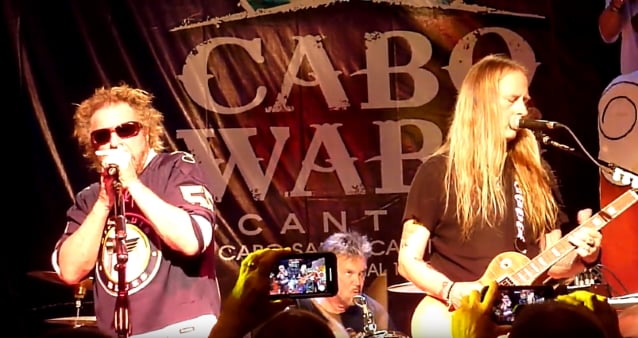 ALICE IN CHAINS' Jerry Cantrell was one of the special guests on night one of Sammy Hagar's 72nd birthday bash on October 9 at Cabo Wabo Cantina in Cabo San Lucas, Mexico. Fan-filmed video footage of the performance can be seen below (courtesy of YouTube user "The Attitude").

For nearly 30 years, Hagar has celebrated his birthday, jamming with his many rock star friends at Cabo Wabo, the cantina he built in 1990 in a sleepy little village on the tip of Baja. The event has grown exponentially every year, with Hagar's milestone 70th birthday spread over four days with 2,000 available tickets chosen by lottery. The entire thing was filmed for "Red Til I'm Dead", a combination concert film and backstage documentary.

"We had 100,000 people in the lottery [in 2017]," Hagar told The Mercury News at the time. "Fans trek from all over the world. Every year, the biggest fans make it there from Japan, from Australia, from all over Europe."

He added with a laugh: "I'm glad we filmed [the 70th birthday bash] because I don't know how much longer I can keep doing this."

Hagar recorded a pair of influential albums with MONTROSE and launched a successful solo career before joining VAN HALEN. After his exit from the band, he returned to his solo career and formed several other projects along the way.