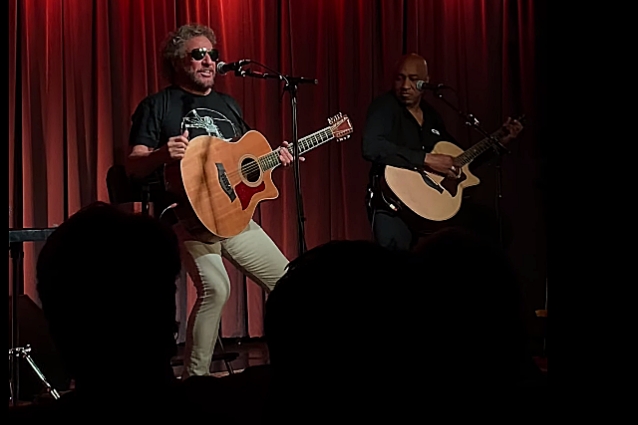 On November 19, Sammy Hagar stopped by the Grammy Museum in Los Angeles for an in-depth conversation with moderator Scott Goldman, followed by a stripped-down acoustic performance.

Several photos of the performance portion of the event can be found at California Rock News. Also available below is video footage of Hagar's acoustic rendition of the VAN HALEN classic "Right Now".

Sammy recently told writer Clay Marshall that he would love to reunite with VAN HALEN for one show.

"If there was ever going to be one reunion — I'd say, you've got one more shot, one more; you're going to put the guys together — it would be VAN HALEN," he said. "Not for a tour; not to make a record; not to go on and on and on, because I don't think we're there. I don't think I can be in the same head space as those guys personally. We're in different head spaces, so I don't think we could create well together, but just one time for the good time? VAN HALEN, number one, hands down. If I said I've only got one more show left in my whole life, who would you want [it] to be [with]? Eddie [Van Halen], Alex [Van Halen] and Michael [Anthony]."

He continued: "The good times and the stuff we made in the band, it was the peak of my life, musical life, career. It was during the MTV [era] — the sex, drugs and rock 'n' roll that was the most... People idolized that lifestyle. You ask any actor from that era, 'What would you want to be?' 'I want to be a rock star. Those guys are having all the fun, making all the money.' That was VAN HALEN. MONTROSE, we never made it. It was a struggle; it was fun; it was lovely; I loved it. The first record, one of the greatest records I ever made in my life. Then, solo stuff — hey, it's great. I hit it big time. Double arenas, a couple stadiums here and there. But VAN HALEN — we hit it. All number ones; sell out every frickin' show you'd ever play in your life anywhere, any sized building in the world. It allowed me to build Cabo Wabo [tequila]; it allowed me to be a household name long enough to say, 'I think I'll keep a face in that house. I may have to do it on a TV show — whatever I've got to do...'"