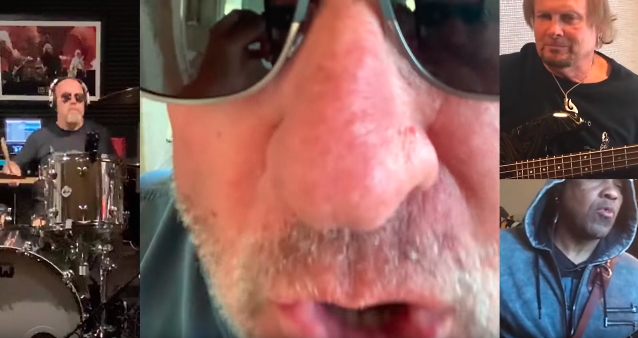 After previously connecting via their smartphones from four separate locations to record a brand new song titled "Funky Feng Shui", they have now regrouped — in a virtual sense — to cover THE WHO's iconic song "Won't Get Fooled Again". Check out video of the performance below.

"The album is really about money, greed, enlightenment and truth," Hagar told Billboard about the LP's lyrical concept. "Money is not the problem. Money is beautiful; You can heal the sick, you can feed the poor, you can stop a war with money. It's greed that's the problem. So you shouldn't hate somebody just 'cause they're rich, especially if they didn't fuck anybody out of (the money) and if they do something good with it. Go guys like Bill Gates and Warren Buffett, you can't be mad at them for being so rich. These guys build hospitals, build schools for children and other countries. Those are good guys. That's what you can do with money."