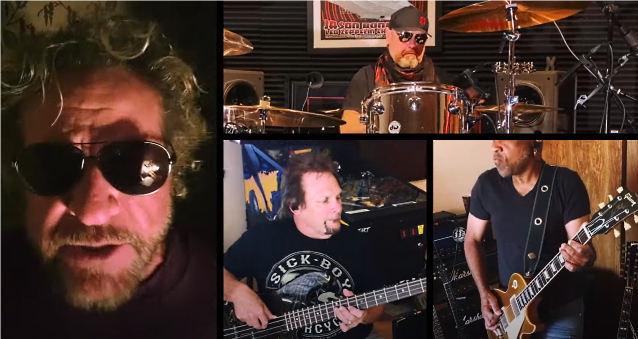 Sammy Hagar and his CIRCLE bandmates have once teamed up via the Internet to record music.

After previously connecting via their smartphones from four separate locations to lay down a brand new song titled "Funky Feng Shui", as well as covers of THE WHO's "Won't Get Fooled Again", VAN HALEN's "Good Enough", BOB MARLEY & THE WAILERS' "Three Little Birds", BUFFALO SPRINGFIELD's "For What It's Worth", Little Richard's "Keep A-Knockin'" and AC/DC's "Whole Lotta Rosie", among others, they have now regrouped — in a virtual sense — to cover VAN HALEN's "Don't Tell Me (What Love Can Do)". Check out video of the performance below.

Hagar said: "When I heard that Kurt Cobain had taken his own life, the first thing I thought of was I wish I were there and could have saved him.

"The original title for these lyrics were 'I want to show you what love can do,' but because it was such a dark horrible thing I just couldn’t shine a light on it. So I changed the final line to 'Don't tell me what love can do.'

"P.S. It was also the time of the breaking up of VAN HALEN, our last album and tour so it added a lot of emotion, negativity and pain in the original vocal performance which surfaced the second I started singing this song for the first time since 1995."