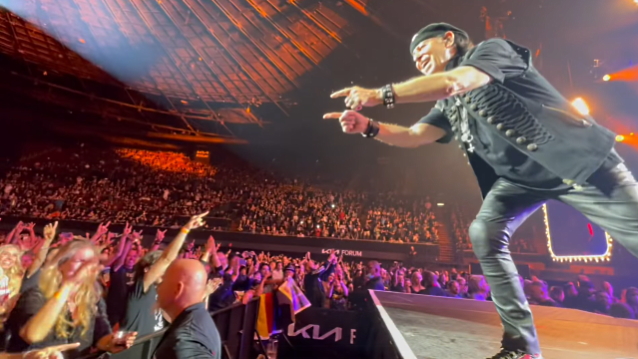 Fan-filmed video of SCORPIONS' October 4 concert at KIA Forum in Los Angeles, California can be seen below.

In August, WHITESNAKE pulled out of the North American tour with SCORPIONS due to singer David Coverdale's "continued treatment for a persistent upper respiratory infection."

SCORPIONS singer Klaus Meine told Chile's Radio Futuro that "Rock Believer" is "dedicated to all the rock believers in the world. And we're very excited after all these years. We thought, when you think about all the touring we did the last 10 years, after the release of 'Return To Forever' in 2015, the time was right to go back into the studio, to write new material, to write new songs and check out if the creativity is still working," he said. "The big aim was, the goal was to make a rock album — to make an album with lots of attitude, power and focus on the good old times and really enjoy the music and have some fun with the music. And that feels really good."

"So many people said rock is dead. It's not dead," he continued. "It's always coming back — sometimes, okay, more stronger [or] less strong — but in the end, it's great to play around the world in over 80 countries we've played so far, and all rock believers. It was always great to share the music with them together and be in connection with them. I mean, that's so amazing and so fantastic, that we are very happy to come out with a new album."

Thank you Los Angeles 🇺🇸 for a great hard rocking night 💫 at the Kia Forum … we love you Californiaaaaa 🏄‍♀️!!!
SCORPIONS 🦂🦂🦂🦂🦂

Posted by Scorpions on Wednesday, October 5, 2022

Here are some preview pics of the Scorpions from last night Live Nation Concerts @ the Kia Forum. Complete photo...