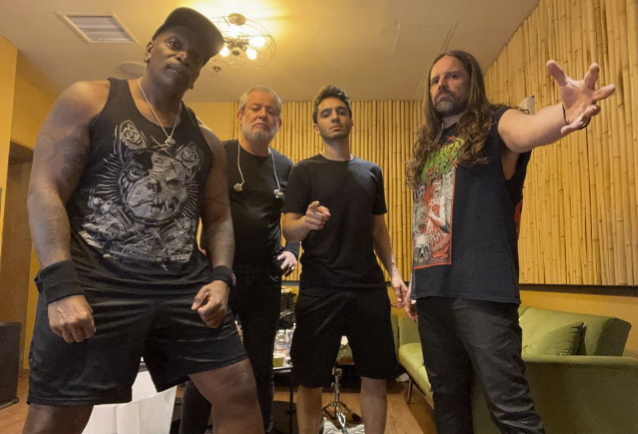 SEPULTURA played its first show with drummer Bruno Valverde (ANGRA) Wednesday night (April 6) at the House Of Blues in San Diego, California. Bruno is filling in for longtime SEPULTURA drummer Eloy Casagrande at the last three shows of the band's North American after Casagrande broke his right leg in a stage accident. The "North American Quadra" 2022 trek with SACRED REICH and CROWBAR kicked off on March 4 in Sacramento and is set to conclude on April 8 in Berkeley, California. SEPULTURA also has a six-date tour of Mexico scheduled for April 12-17.

Fan-filmed video of the San Diego concert is available below.

On Monday (April 4),Eloytook to his Instagram to share X-ray photos of his fractured tibia and fibula bones, and he included the following message: "It is with deep sadness that I announce that I have unfortunately broken my right leg. Yesterday, at the El Paso show, during the break between songs I ended up falling off the stage and fracturing my tibia and fibula. I'm going back to Brazil to start the recovery. I'll see you soon! The tour will continue, but without me. More news coming soon. I ask for your support."

This is not the first health issue that has plagued the "North American Quadra" 2022 tour. Last month, SACRED REICH was forced to cancel more than half dozen shows on the trek due to frontman Phil Rind's "ongoing respiratory illness."

The now-31-year-old Casagrande joined SEPULTURA 10 years ago as the replacement for Jean Dolabella.