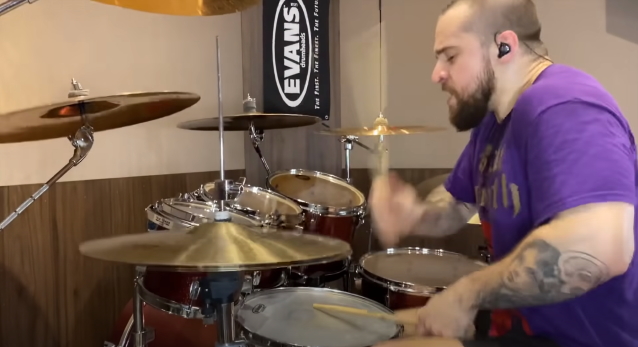 Video of SEPULTURA's Eloy Casagrande playing along to SLIPKNOT's classic song "People = Shit", from the 2001 album "Iowa", can be seen below.

Says Eloy about the clip: "No audio editing, no samples, no triggers. Audio recorded with the EAD10 plugged straight to my phone (using the device's camera to record the video).

"This album was recorded without a click track, which means that the tempo is volatile."

This past February, SEPULTURA singer Derrick Green told Australia's Everblack Media that Casagrande has had "a tremendous impact" on the group since he joined in 2011. "It's undeniable because he's such a strong force," he said. "He loves playing metal music. He's one of the most talented drummers I've ever seen, honestly. That power is consistent from beginning to the end. It really has rubbed off on all of us to really push ourselves further. He's such a perfect match for the band. He really is always influencing us in so many ways to really go beyond — above and beyond."

More than a year ago, Eloy told Drumtalk that he didn't care about the long-simmering feud between founding SEPULTURA members Max and Igor Cavalera and his current bandmates. "I respect all the history," he said. "I have total respect for the past drummers, Igor and Jean [Dolabella]. They are amazing guys, incredible guys, but we just live in the present. I really don't care what happened, what didn't happen. I respect all the music. I respect their music nowadays. It's just that we have to follow our path and that's it."