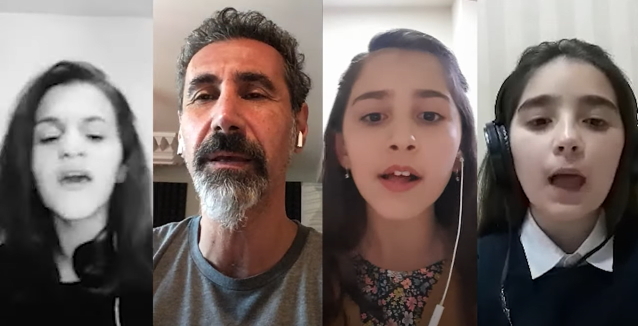 On May 6, SYSTEM OF A DOWN frontman Serj Tankian was joined by students from Artsakh (Nagorno-Karabakh) to perform "Bari Aragil" at the Hope For Armenia virtual event hosted for Teach For Armenia.

The program in support of education in Armenia and Artsakh drew many attendees, including cameos by actress and singer Cher and entrepreneur Kim Kardashian.

Modeled after Teach For America, Teach For Armenia is a partner of the Teach For All global network, putting an emphasis on the importance of education so that children can continue to grow and thrive.

Serj previously performed "Bari Aragil" with his father Khatchadour Tankian more than a decade ago, and they even filmed a very special video for the track showcasing the two of them singing it together. It was featured twice on the Thanksgiving day Armenia Fund Telethon broadcast worldwide in 2009.

In November 2020, SYSTEM OF A DOWN made new music available for the first time since 2005 in order to rally for Armenia. They released "Protect The Land" and "Genocidal Humanoidz" and pledged royalties earned, including from purchases on Bandcamp, to the major non-profit Armenia Fund. Along with other donations from fans on their social pages, they have raised over $600,000.

Tankian was born to Armenian parents, with four grandparents who escaped from Armenia to Lebanon during the persecution of the Armenians.