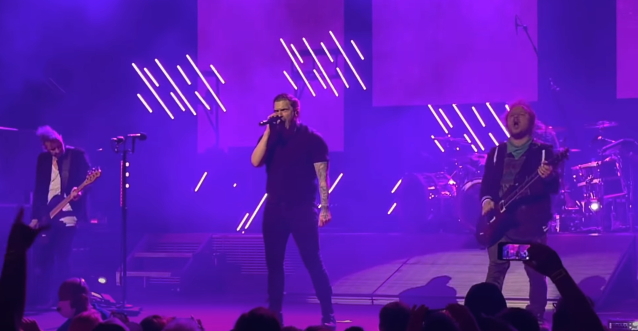 SHINEDOWN performed its new single, "Planet Zero", live for the first time last night (Wednesday, January 26) at the opening show of its "Shinedown Live In Concert" tour at The Warfield in San Francisco, California. Fan-filmed video and photos of the performance can be found below.

"Planet Zero" is the title track of SHINEDOWN's seventh album, which will be released on April 22 via Atlantic Records.

Vocalist Brent Smith stated about the new disc: "If we shut each other down and allow ourselves to be divided by the information we consume and the way we talk to each other, we lose our humanity. When you look outside of your phone, you'll see there are so many people doing good things and trying to take care of each other. But we're starting to see parts of society slip into an unknown. 'Planet Zero' was written for all of us. The fact is that we're all here on this planet no matter what, so it's time to actually move forward together with empathy, perseverance and strength. With that said… welcome to PLANET ZERO."

Last month, Smith told 95.9 The Rat's Carl Craft about the new LP's more "stripped-down" approach: "We wanted to push everything to the front. And what I mean by that is we've proven that we can make these records that there's a lot of musicianship involved in it, and we have layered our records over the years because we love music and we love sound and we try to make really cinematic records. So with that, you have a lot of instrumentation that is not just drums, bass, guitar and vocals — we use orchestras, we use a lot of synthesizers, we use a lot of techniques that… We don't believe in… Don't tie your hands up when you're making a record. Make the record that you wanna make. And ultimately, though, what we wanted to do with this album was make it just as ferocious as the other records but not utilizing so much of some of the style that we've done in the past with layering and layering guitars, adding lots of synth beds, stacking the vocals."

He continued: "I come from the Freddie Mercury school when it comes to vocals and layering and backgrounds and things of that nature because I try — I say 'try' — try to use my voice as an instrument. But this is about really less is more. So the majority of this record is authentically drums, bass, guitar. There are piano songs; there's two really, really very intense-subject-matter piano songs that are gonna be in SHINEDOWN seven. But we wanted to make a real rock record, we wanted to make a real record where we focus on just making sure that the band is being heard the way the band needs to be heard. So, not a lot of layering. It doesn't mean it's any less powerful; it's just we're not dealing with a lot of stacks. We're just putting things left to right stereo, pushing everything to the front. The vocals aren't layered a ton — not a lot of effects on the vocals, so not a lot of delays and reverbs and things like that. A lot of the vocals on the record are dry and kind of right up in your face."

Smith also talked about the lyrical themes covered on the new SHINEDOWN album, saying they were inspired at least in part by the ongoing pandemic and resulting impact on the community, residents and businesses.

"Going through everything that the world went through last year, and we wrote the majority of the record last year, and this year, we couldn't turn a blind eye to everything that was going on," he said. "And we talk on this record, and we express on this record — we're not trying to dance around certain subject matter. We're trying to be very honest and very real. In a lot of ways, this is a very humanitarian record."

Asked if SHINEDOWN will "piss people off" with some of the lyrical positions that are taken on the upcoming LP, Smith said: "Possibly. But the thing about it is I don't necessarily think it's about pissing people off; it's about understanding what we all went through but where we need to go now. I think that it gets lost. It's never supposed to be about… And I say this because I'm being very, very bold and very honest about it. This country, it's not called the Divided States Of America; it's called the United States Of America, and we want people to understand that that comes down to the people; that comes down to us. And us being able to not only work with each other, to grow with one another. But when you have certain people in power that do not have your best interests in mind, you have to stand up and make your voice heard. When I see what's going on in regards to people's freedom of speech and it being censored and people being pushed into a corner because of their opinions and what have you. You need to be able to have constructive conversations with each other in order to get actual action to happen for positive change."

Regarding the first single from SHINEDOWN's seventh album, Brent said: "It honestly addresses everything that society has dealt with from a planetary platform, if you will — not just here in the U.S., but the whole world — what the last 18 months has been like, and, at least in our opinion, how we've gotta move forward.

"Listen, the record… We're talking about things that we've never talked about before," he revealed. "We're opening up the conversation into different subject matters that SHINEDOWN has never addressed. We have the full support of our label, our management and hopefully our fanbase, whether they've been there from day one or they're just kind of finding out who we are. But it's a record that I think some people will consider controversial, I think some people will consider to be very provocative, especially for SHINEDOWN, but it's also something that we feel that it is very important and that it is necessary… Don't get me wrong either — there's a lot of triumph on this record, but there's also a lot of having to take a step back and go, 'What's really going on? And how do we stop it from happening if it's going to be something negative on the human race as a whole?' Our society, the way that we live with one another, we share this planet with a lot of different organisms and creatures. It's not just about us. It's important that everybody really takes a step back and doesn't always make it about them. We have to work together — like, all of us; we've really gotta start working together with each other and really creating a positive change forward for not only society but also for this beautiful planet that we've been given."

The follow-up to 2018's "Attention Attention" was recorded in part at a new studio in Charleston, South Carolina spearheaded by the group's bassist and producer Eric Bass.

A few photos of Shinedown from the opening night of the 2022 tour at The Warfield last night. Full review and pictorial coming soon to Mayhem Music Magazine 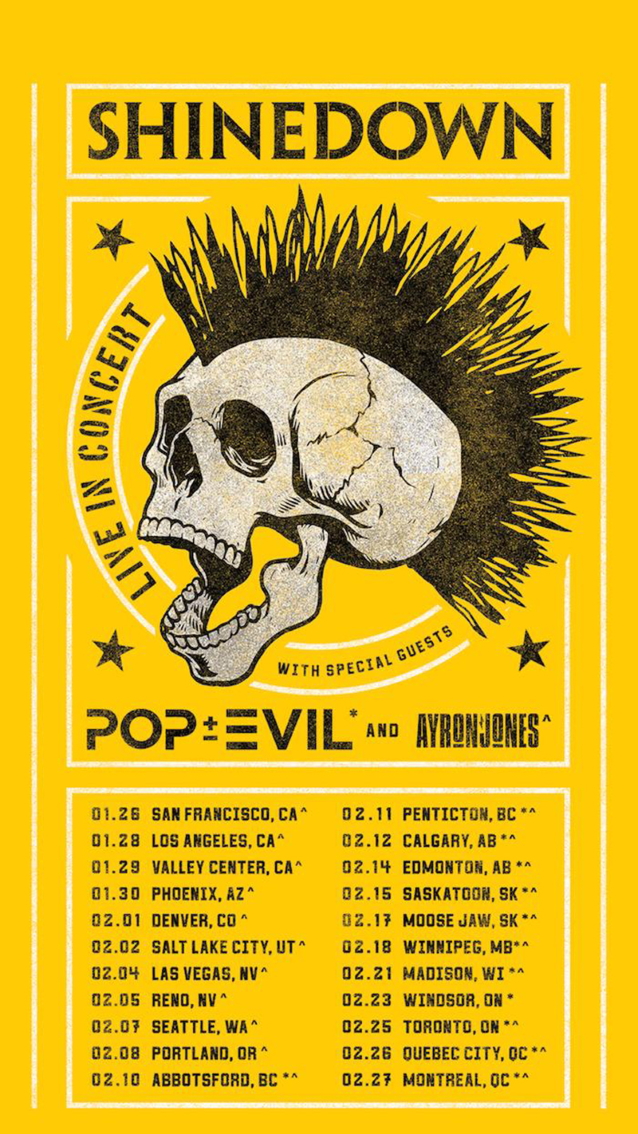