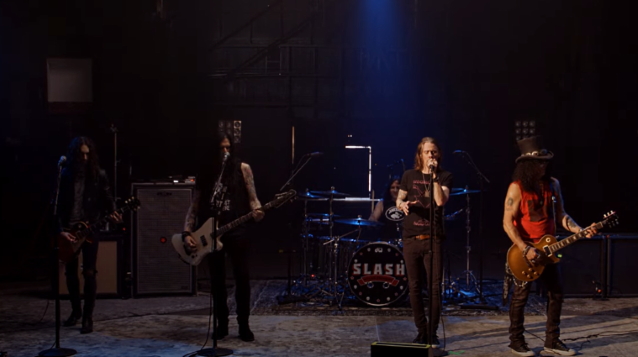 SLASH FEATURING MYLES KENNEDY AND THE CONSPIRATORS performed their new album, "4", in its entirety for a concert, "Live At Studios 60", which aired this past Friday, February 11 live and free on the Slash YouTube and Facebook. The performance was immediately followed by a live question-and-answer afterparty with Slash, exclusively on YouTube Premium.

The new album "4" has the added history-making distinction of being the first-ever album to be released on the new Gibson Records label, which is headquartered in the iconic American instrument brand Gibson's hometown of Music City, Nashville. In light of the 30-year partnership between Gibson and the Grammy Award-winning Rock And Roll Hall Of Fame inductee Slash, it makes sense the new SLASH FEATURING MYLES KENNEDY AND THE CONSPIRATORS' album "4" was released via Gibson Records.