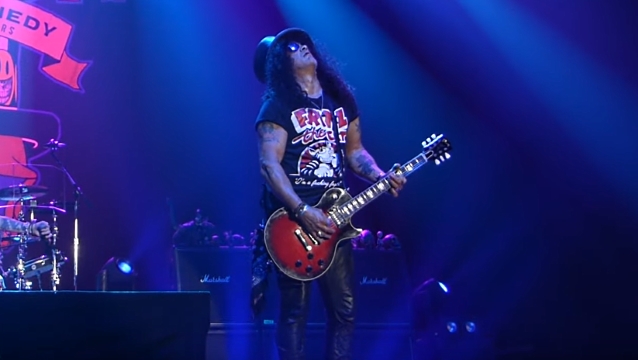 Guitarist Cory Churko made his live debut with SLASH FEATURING MYLES KENNEDY AND THE CONSPIRATORS on June 25 at the Rockhal in Luxembourg. Fan-filmed video footage of the concert can be seen below.

Churko is filling in for THE CONSPIRATORS' regular rhythm guitarist Frank Sidoris, who left the band's European tour to be in the U.S. with his wife, Alexandria Finley, for her first full-on chemotherapy treatment in her battle with with cervical cancer.

Churko, who plays alongside CONSPIRATORS members Todd Kerns and Brent Fitz in the cover band TOQUE, will appear at all CONSPIRATORS dates through July 9 in Tel Aviv, Israel.

Kerns wrote on social media: "I miss him already. Frank is headed home until the U.S./Canada leg of the SLASH FEATURING MYLES KENNEDY AND THE CONSPIRATORS 'Living The Dream' 2019 tour to look after his lovely wife Alexandria who is winning her fight with cancer. Our dear friend Cory Churko will be sitting in from Luxembourg to Tel Aviv. As much as we will miss Frank, we are fortunate to have such a talented and good-hearted friend like Cory to fill in. We love you, Allie and Frank, and we got you."

A GoFundMe page has been launched to raise money needed to help Finley cover the costs of her cancer treatment.

Slash is continuing to tour in support of his latest album, "Living The Dream", which was released in September via his own label Snakepit Records, in partnership with Roadrunner Records.

"Living The Dream" is Slash's fourth solo album, and third with Slash and his bandmates Myles Kennedy (vocals),Fitz (drums),Kerns (bass and vocals) and Sidoris (guitar and vocals).

In a 2015 interview with Moshcam, Slash stated about his working relationship with THE CONSPIRATORS: "It's just something that clicked right from the very beginning. Initially, Myles and I just had that spark, sort of a creative connection, from the very, very beginning. And that's something that's established; it always happens when we work together. And then, with Brent and Todd, it's the same kind of thing where we just have a really great writing and performing and recording chemistry, where everybody just really digs what we are about individually and collectively, and it just works."