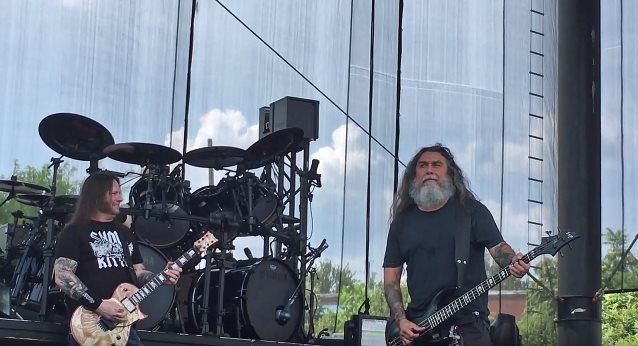 The legendary thrash metal band's August 5 concert at the Forum in Inglewood, California was reportedly filmed for a forthcoming DVD.

SLAYER's latest album, "Repentless", was released on September 11, 2015 via Nuclear Blast. The follow-up to 2009's critically acclaimed, Grammy-nominated "World Painted Blood" was produced by Terry Date, who has previously worked with PANTERA, DEFTONES and SOUNDGARDEN. The artwork was created by Brazilian artist Marcelo Vasco in collaboration with Tom Araya and Kerry King.

Soundcheck in Dawson Creek, British Columbia where Tom, Gary and Paul dance with the "Led" in their dreams. \db/
?:Sheldon Morgan
#slayernationofficial #repentless2017