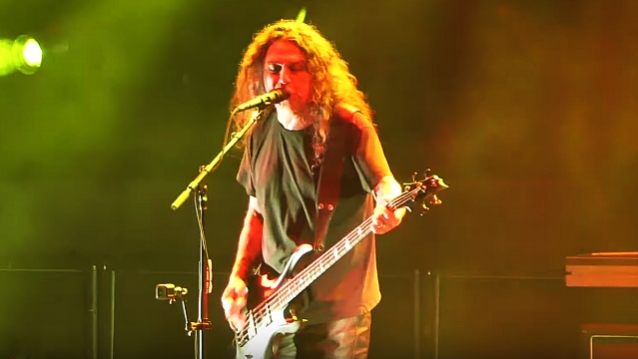 Fan-filmed video footage of SLAYER's entire November 3 concert at PNC Bank Arena in Raleigh, North Carolina can be seen below.

Earlier this month, SLAYER set off on "The Final Campaign", the seventh and final leg of its farewell world tour. This last hurrah started at the ExploreAsheville Arena in Asheville, North Carolina, and will see the band taking its goodbye bow at the Los Angeles Forum on November 30. Accompanying SLAYER for this last ride are PRIMUS, MINISTRY and PHILIP H. ANSELMO & THE ILLEGALS performing a vulgar display of PANTERA, who are providing support on all dates.

SLAYER's short narrative film and concert, "Slayer: The Repentless Killogy", is coming to theaters worldwide for a one-night-only event on November 6. The film was written and directed by BJ McDonnell, who conceived and directed the three brutal music videos — "You Against You", "Repentless" and "Pride In Prejudice" — for SLAYER's final studio album, "Repentless" (2015).