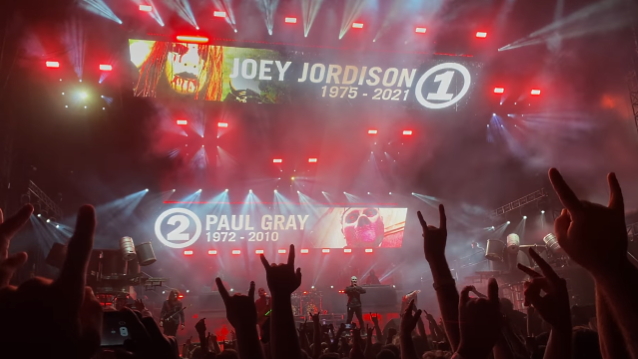 At the conclusion of its headlining set at this past Saturday's (September 25) Knotfest Iowa, SLIPKNOT paid tribute to two of its founding members, Joey Jordison and Paul Gray, both of whom are no longer with us.

After performing the song "Surfacing", a song written by Gray, Jordison and SLIPKNOT frontman Corey Taylor, pictures of Joey and Paul emerged on the large video screens on the stage along with the numbers each one of them was assigned at the band's formation as well as their birth and death years. Fan-filmed video footage of the tribute can be seen below.

Jordinson died "peacefully in his sleep" on July 26 of an unspecified cause. He was 46 years old.

Gray was found dead on May 24, 2010 after overdosing on drugs in a hotel room in a suburb of Des Moines, Iowa, where he and SLIPKNOT were based. His family blamed the death on a Des Moines pain doctor, Daniel Baldi, who had treated Gray for years, and sued the doctor and his former employers.

Paul's wife, Brenna Gray, testified during Baldi's trial that she tried reaching out to some of Paul's bandmates in SLIPKNOT just days prior to the bassist's death but that none of them wanted to get involved. She revealed, "One was playing golf two minutes away from our house but couldn't come. Nobody else cared, nobody was involved. They told me it was my problem."

Brenna said in a 2011 interview with Revolver that her husband had agreed to get help for his drug problem just one day before he died.

After a lengthy hiatus, SLIPKNOT resumed touring in 2011, with Donnie Steele playing bass live. The band in 2014 secured the services of British musician Alessandro "Vman" Venturella to play bass on tour.