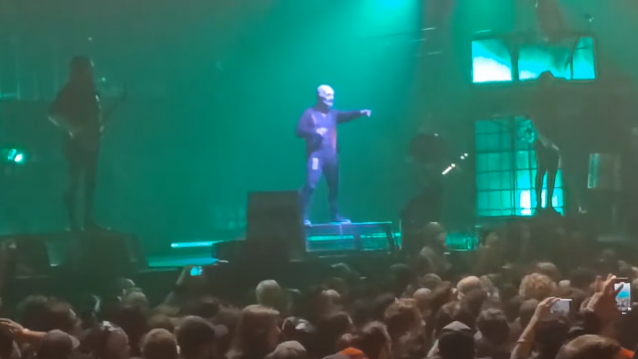 SLIPKNOT frontman Corey Taylor stopped the band's concert this past Monday (April 11) in Winnipeg, Manitoba, Canada mid-song in order to alert paramedics to a fan who had fallen in the pit.

A few seconds later, he continued: "All right. He's out, guys. Make some noise for the medics… Let's make sure they get out. We've got a clear path right here. As soon as they're safe, we're starting this fucking thing again. Are they good? Okay. Should we just do it from the top? Okay. Do it from the top. You ready?"

Just two months ago, Taylor said that he hoped something like the recent Astroworld concert tragedy never happens at any one of SLIPKNOT's concerts.

Ten people, including a 9-year-old and two teenagers, died while many more were injured after a crowd surge during Travis Scott's performance at the Houston music festival in November. The rapper has since been criticized for appearing to keep the show going despite pleas of help from the crowd. Although he paused a few times, many are saying this response was not enough. In the weeks the incident, dozens of lawsuits have been filed and a slew of questions remain unanswered about what went wrong.

Taylor addressed the deadly event in a recent interview with Fox News. He said: "It's one of the things that scares you as a performer. The last thing you want is for anything to happen to your audience. We as a band, as an organization, we've always gone above and beyond to try and make sure that our fans are okay. Even back in the day when we were crazy and kind of doing insane stuff, if anything ever happened to our fans, we immediately stopped the show and made sure they were okay. We never carried on. We always made sure that security was the priority. Number one. That hasn't changed to this day. It's the one thing we try to focus on."

Corey also touched upon the "security issue" which caused the cancelation of SLIPKNOT's November 2019 appearance at the Knotfest Meets Forcefest in Mexico City. According to reports, the stage barricade broke during BEHEMOTH's set and it was impossible to fix it in time for either of the two scheduled closers — SLIPKNOT and EVANESCENCE — to perform.

Taylor said: "The issue that arose at Knotfest Mexico was because there was an unsafe situation in the audience. We and our security did not feel comfortable going back out there knowing that people might get injured. There was a broken barricade that we couldn't fix. We physically couldn't fix it. So we had to shut down. And because we did that, most people left. There was a riot, but nobody got hurt. They were taking it out on the instruments and the grounds and whatnot. But that's the difference between us and a lot of other bands. We wouldn't have felt good carrying on, knowing that our fans might be in danger. It really comes down to what your priorities are."

He added: "Obviously, I don't know any of the people involved [in Astroworld]. And I don't know anything more than what I've read in the news online. So I can't make any judgments. All I can talk about is where we are [as a band] and where I am. And I can just say that I hope that something like this never happens at any one of our concerts."

All ten Astroworld victims' cause of death was listed as "compression asphyxia," according to documents from the Houston medical examiner's office. One victim had a contributing cause of "combined toxic effects of cocaine, methamphetamine, and ethanol." All deaths were ruled accidental.

SLIPKNOT made headlines last November when a bonfire was started in the mosh pit at the band's concert in Phoenix, Arizona. SLIPKNOT was performing at the Ak-Chin Pavilion as part of its "Knotfest Roadshow" when attendees set fire to a stack of lawn chairs, with the scene captured in various social media posts from fans who attended the concert. As a result, SLIPKNOT's performance was stopped for roughly 30 minutes in order to allow the fire department to put out the blaze. Due to the delay, SLIPKNOT was reportedly forced to drop "Duality" and "Spit It Out" from its set.

SLIPKNOT kicked off the 2022 iteration of its "Knotfest Roadshow" tour on March 16 at the Fargodome in Fargo, North Dakota. The "Knotfest Roadshow" tour is taking place over two legs, both headlined by SLIPKNOT. The first leg features special guests IN THIS MOMENT and WAGE WAR. The second leg will feature special guests CYPRESS HILL and HO99O9. The first leg of the 38-date run, produced by Live Nation, will wrap up in Vancouver, British Columbia, Canada on Sunday, April 17. The second leg kicks off on Wednesday, May 18 in University Park, Pennsylvania and hits a further 17 cites before culminating on Sunday, June 18 in Chula Vista, California. 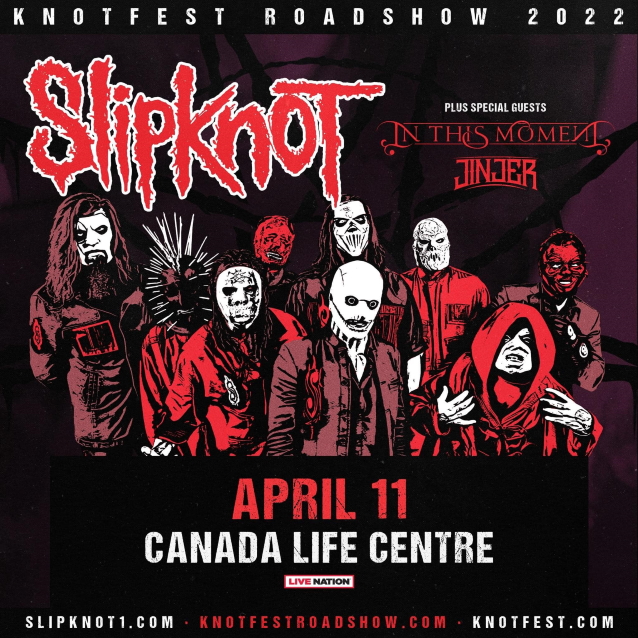