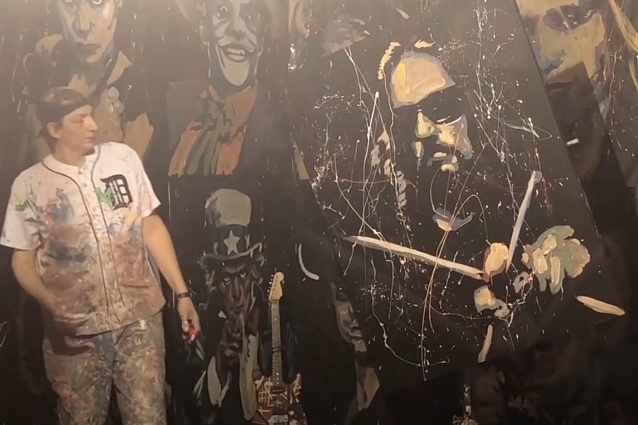 A video of Dave Santia, a premier performance speed painter from the Detroit area, painting an amazing portrait of late MEGADETH drummer Nick Menza in less than six minutes can be seen below.

With a combination of rock and roll and attack of speed and color, Santia creates his speed paintings right before your very eyes in just a matter of minutes.

One day, while Santia was sitting at home wondering how he could combine his two loves of art and music, he found himself surfing on YouTube when he came across a video of speed painter Denny Dent. Santia watched that video, and thought to himself, "I think I can do that." So he practiced and worked at it and soon unveiled what he calls his "Art And Soul".

Originally planning on using his speed painting ability to get people's attention and to get them interested in his oil paintings that can take up to 40 hours, Dave soon found himself invited to perform his speed paintings at various charitable fundraisers and occasional corporate events.

An official Menza documentary film "This Was My Life - The Story of Nick Menza", is currently in the works. It is described in a press release as "an unflinching exploration into the life of one of the most successful thrash-metal drummers of all time, authorized by the Menza family. From his childhood all the way through to the end of his life including a true blow-by-blow account of the repeated failed attempts of the classic 'Rust In Peace' lineup."