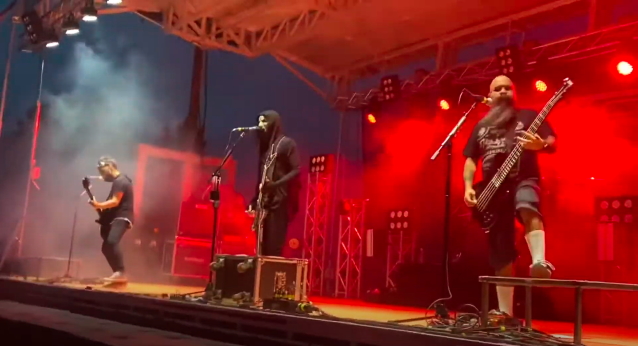 STATIC-X frontman Xer0 performed without his now-trademark spiked-up hair during the band's appearance Saturday night (July 18) outside the Q&Z Expo Center in Ringle, Wisconsin. Fan-filmed video footage of the entire concert is available below.

The once-named Herd Immunity Fest faced backlash when it was first announced in late June due to its name as well as the fact that it was being staged amid the COVID-19 pandemic. Organizers quickly renamed the event the July Mini Fest, but not before a handful of bands dropped off the bill, including NONPOINT, ROYAL BLISS, KALEIDO and BLACKTOP MOJO.

Last year, STATIC-X wrapped up a world tour comprised of nearly 100 mostly sold-out dates in celebration of the 20th anniversary of its platinum-selling debut album "Wisconsin Death Trip". The shows also served as a traveling memorial for Wayne, who passed away more than five years ago.

While the identity of Xer0 has not been officially revealed, strong rumors suggest that DOPE frontman Edsel Dope is the one performing with Jay, Fukuda and Campos and appearing in all of STATIC-X's promotional videos.

Speaking to the "Everblack" podcast, Campos said that finding the "right guy" to front STATIC-X on the "Wisconsin Death Trip" anniversary tour was "the big hurdle. But once we figured that out, then we started trying to figure out, 'How do we represent Wayne in a cool way that he would think was cool?'" he explained. "And we started thinking about all those t-shirt designs that we had of skulls with Wayne's hair and beard, and how to bring that to the stage. And I think the mask came out pretty cool, in a cool way to represent Wayne, and I know Wayne would have thought it was cool. And then keeping the singer's identity anonymous also keeps the focus on remembering Wayne and remembering the original lineup of the band and the first record, and it keeps the focus on that instead of having a 'Van Hagar' situation. We didn't wanna present it [as] 'Here's STATIC-X with their new singer.' It's not what this is about and it's not what we're trying to do. So I think the mask, it helps accomplish that."

In a 2019 interview with Kerrang! magazine, Xer0 confirmed that he was the one who came up with the idea of playing masked.

"I've spent the last 20 years building my own identity and touring the world with my own band," he said. "It didn't feel right for my image or identity to be placed in the center of something that I wasn't part of creating… It just felt like a perfect way to keep the focus on the four guys that made this great album and started this really cool band. After a few days of living with it, I decided to spike my hair up, just to see what it would look like with the mask on, and I was like, Oh, FUCK. Let's be honest: Wayne's hair kind of became the visual identity of STATIC-X."

He added: "We didn't set out to create a 'character,' it just evolved naturally. We went to our friend Laney, who also makes the masks for many of the SLIPKNOT guys, as well as Manson's band, and Rob Zombie's band, et cetera. Wayne liked heavy metal, monster movies, and monster trucks. He would be honored by the celebration and he would dig the shit out of this."

We are excited to return to the stage this weekend for what will be our first show since March. Obviously, over the last few months a lot has changed in the world, so it is of the utmost importance that we EACH do our part to make this as safe as possible for everyone. While your community leaders have deemed this to be a safe and acceptable gathering, we would still like to personally ask for each and every one of you to go the extra mile to help everyone remain safe... We are asking everyone to MASK UP & BACK UP. DISTANCING: The promoter has advised that the OUTDOOR site is huge. It can accommodate 10,000 people, but they have capped ticket sales at 2,000. This was a huge factor for us agreeing to play. This means that there is plenty of room for everyone to spread out and be safe. There are strictly enforcing a NO MOSHING rule and we are in full support of this for obvious reasons. We are asking that everyone please be respectful of everyone else’s personal space. We ask that you are conscious of this while watching the show, standing in lines for food, drinks and bathrooms, etc. WEAR A MASK! This is a simple request and it will help to ensure your safety, the safety of those around you, and also those at home. Wearing a mask demonstrates that you respect yourself, and it also demonstrates that you respect others. We will all be wearing masks and we ask that you all do the same. Please wash your hands, try not to touch your face and use hand sanitizer. We have been informed that hand sanitizing stations will be available throughout the site. We all want live shows to return and for things to get back to “NORMAL”. We want to reiterate that this upcoming show does not fall under the definition of what any of us would consider to be “NORMAL”. This is a baby step and in many ways this is also a test. We want you to remember that most places in America are not yet able to have this type of concert experience. Let’s all go above and beyond, in order to help ensure the health and safety of everyone involved, as well as everyone at home. #MASKUP & #BACKUP! Sincerely, Static-X #StaticX