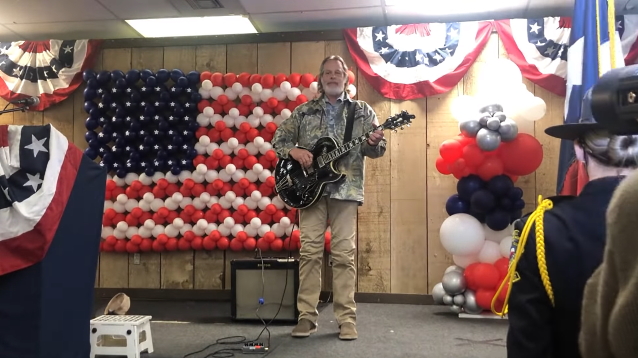 Ted Nugent performed the U.S. national anthem at the 13th annual Walker County Warrior Banquet, which was held last night (Thursday, January 27) at the Walker County Fairgrounds in Huntsville, Texas. The Banquet, an event on Texas gubernatorial candidate Allen West's campaign trail, included a fiery speech by Nugent, who is widely considered to be one of the most outspoken conservative musicians in rock.

West had served as a member of the House of Representatives for Florida's 22nd congressional district from 2011 to 2013 and later relocated to Texas, where he was elected chair of the Republican Party of Texas in 2020. He resigned from that position last June, a short time before announcing a bid for governor.

Nugent, who recently resigned from the board of the National Rifle Association (NRA) after 26 years, has called Donald Trump "the greatest president in our lifetime." He also said the billionaire real estate mogul represents "the heart and soul of the best American families out there."

Earlier this month, Nugent once again repeated the baseless conspiracy theory that the riot at the U.S. Capitol was orchestrated by undercover FBI agents, Antifa and Black Lives Matter.

Nugent, an outspoken conspiracy theorist who has refused to take the vaccine, has falsely claimed that public health measures taken during the COVID-19 pandemic violate the Nuremberg code, a set of medical experimentation guidelines set after World War Two, as the vaccine is "experimental."

In the past, Nugent, who battled COVID-19 last April, had referred to the virus as a "leftist scam to destroy" Trump. He had also repeated a narrative pushed by conservative media and disputed by health experts that suggests the official death count from the coronavirus is inflated.

We had an amazing night last night at the Huntsville Warrior Banquet! Thank you to all who came out for a great event. Special thank you to @AllenWest, @TedNugent, and all of those who made this such a special night. #NeverFightAlone#HuntsvilleBanquet#Texaspic.twitter.com/AtTpU3bWhP