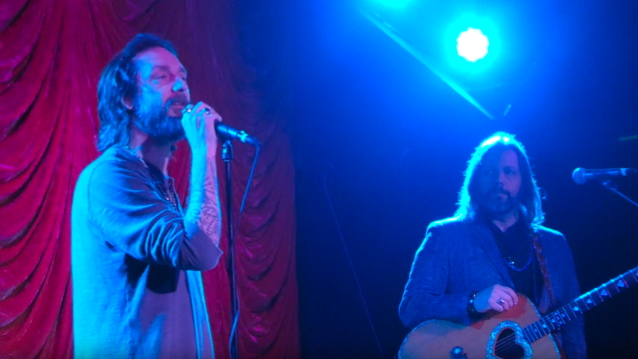 Watch THE BLACK CROWES' CHRIS ROBINSON Admonish Crowd For Being Too Loud During Acoustic Concert: 'You Should F**king Pay Attention'

Chris Robinson repeatedly admonished the crowd for speaking too loudly during BROTHERS OF A FEATHER's concert last Friday night (February 21) in Philadelphia, Pennsylvania.

The trek, which sees Chris and his brother Rich performing all-acoustic THE BLACK CROWES tunes at intimate venues, serves as a warm-up for this summer's THE BLACK CROWES tour in celebration of the group's 1990 debut album "Shake Your Money Maker".

During BROTHERS OF A FEATHER's show at the 400-capacity The Foundry at the Fillmore, Chris was apparently annoyed at fans who seemed refused to stay quiet while he and his brother performed.

"If you can't concentrate for a few minutes, why are we doing this?" Chris can be heard telling the audience in one of the fan-filmed clips of the show (see below). After one fan shouted out, "We are sorry. We love you," Chris countered with: "I get it, and we're happy to be here, but it's not any fun if we can't get into it. And we can't get into it when all I can hear is conversations. What's the point? I really wanna know. You're fucking grown adults and you paid your money. You should fucking pay attention." He continued: "I get it. The vibe is so good, and everyone's happy, but we have to stop, 'cause we can't hear ourselves. Seriously, man. Get it fucking together."

According to The Philadelphia Inquirer reviewer Dan DeLuca, "the show didn't go off the rails, but it began to feel like an evening to be endured, rather than celebrated."

The Foundry concert was actually the second Philadelphia performance of the day for Chris and Rich, who also played a WXPN-FM (88.5) Free At Noon concert at the slightly larger World Cafe Live.

The BROTHERS OF A FEATHER tour will include six more shows in the U.S., concluding on March 6 in San Francisco.

The new lineup of THE BLACK CROWES played two concerts in November — in West Hollywood, California and in New York City.

The official THE BLACK CROWES tour kicks off properly on June 17 at Austin's Austin360 Amphitheater in Austin wraps on September 19 at the Forum in L.A.