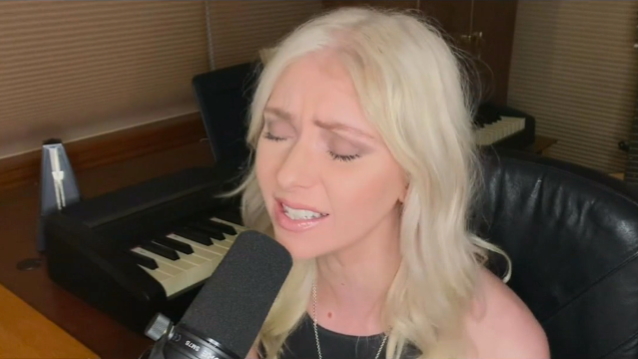 THE PRETTY RECKLESS singer Taylor Momsen played a piano-driven version of the band's latest single, "25", on this past Friday's (November 13) episode of Fox 5's "Good Day New York". You can now watch her performance below.

"25" is taken from THE PRETTY RECKLESS's upcoming album, "Death By Rock And Roll", which will be released on February 12, 2021 via Fearless Records in the U.S. and Century Media Records in the rest of the world.

Momsen stated about the track: "'25' is an interesting song that came from a lot of different places. It was the first song we recorded for the record in early 2019. I had just turned 25 when we wrote it. In a way, it's an autobiography and hopefully shows that this album really ventures out into new territory with the music."

A few months ago, Momsen confirmed that RAGE AGAINST THE MACHINE guitarist Tom Morello guests on "Death By Rock And Roll". Morello appears on a track called "And So It Went".

Momsen told Forbes about "Death By Rock And Roll": "We worked really hard on this album and we went through a lot of loss, a lot of tragedy, and we really poured our hearts and souls into it and in a way I can't express verbally. It's all there in the music, so that's why I say it feels like a rebirth. It almost feels like the first record in a sense, because we really had to go back to the beginning after losing Kato, our producer. I'm just really excited for people to hear it because, in my opinion, it's the best album we've ever made so it's hard to sit on this music.

"We talked about holding the song 'Death By Rock And Roll' for longer too, and I was, like, 'I can't do this. I can't just sit on this album forever.' The world needs music and music has such a healing thing to it, and it saved my life, time and time again. If we put out a song and if it can put a smile on some people's faces, great, we'll take it from there. That's kind of what we're doing — we're riding the wave. This is just such an unprecedented time so we're trying to take it step by step, and see where things go. Everything is still up in the air, but we are planning on releasing more singles before the full album is out. There's going to be more music to come."