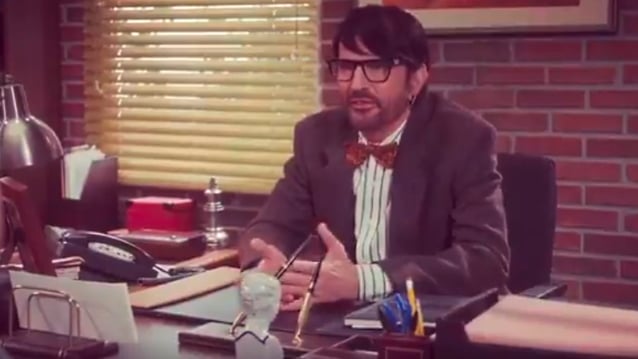 Watch TOMMY LEE Play A College Professor On 'The Goldbergs'

In the episode titled "Preventa Mode", Barry Goldberg (Troy Gentile) takes his attractive college professor on a date for Valentine's Day. After losing her affection after the first date, he pays a visit to the head of her department, Professor Lee, played by Lee, to make sure dating a teacher is okay.

In a preview clip Lee shared to Twitter earlier today, Goldberg tells the professor that "there's this awesome rock song about inappropriate love that I'm trying to base my life on." Lee responds: "You mean that deafening noise made by morally questionable gentlemen?" before revealing the only type of "rock" he likes.

"I love doing this type of thing," said Lee about his guest starring appearance on "The Goldbergs". "I got to work with an amazing cast and crew, play dress up for a day and have a blast. And I gotta say, damn... those professor shoes were so comfortable!"

"Growing up in the '80s, I spent a lot of time watching MTV. I loved MÖTLEY CRÜE's 'Home Sweet Home' video about missing your girlfriend while being out on the road," said Adam F. Goldberg, executive producer, "The Goldbergs". "It was one of the first rock ballads that starts off with a soft piano and kicks in with the full band. I'm so grateful Tommy agreed to have some fun with us in this episode. He was terrific."