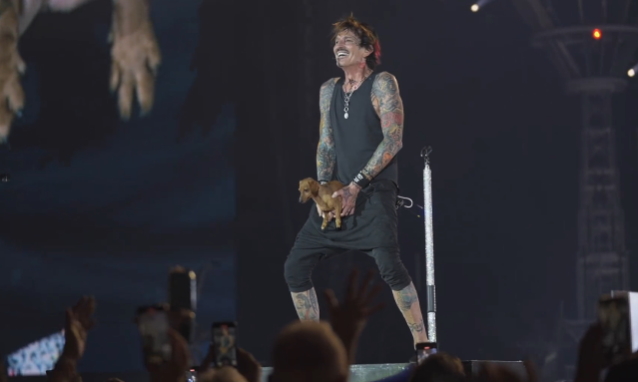 At MÖTLEY CRÜE's hometown concert in Los Angeles on Saturday (August 27),drummer Tommy Lee once again addressed a recent controversy about a nude selfie he posted.

In a video posted on the rocker's verified Instagram account, he is seen talking to the audience at the band's show at SoFi Stadium during "The Stadium Tour". Prior to launching into the CRÜE's classic ballad "Home Sweet Home", he told the crowd: "Some of you might've heard this before, but a couple of weeks ago we had a break on this tour and I went to some fuckin' island in Bora Bora and I got fuckin' loose, drunk as fuck, fuckin' wobbler. I fuckin' fell the fuck off. So what happened is I got all drunk, took a bunch of pictures of my dick, tossed them up on Instagram. And so I figured they took them down from Instagram, and you guys wanna see my wiener? You guys wanna see the shit? Is that a yeah? All right, let's go. Let me show you my fuckin' weiner. You ready? There it is," he added as he pulled out a live Dachshund from his pants. Dachshund are sometimes called wiener dogs because their long bodies resemble hotdogs.

Lee then on to encourage his male concert goers to expose themselves but got no takers.

"I guess the boys are a little shy, huh, fellas?" he joked.

MÖTLEY CRÜE's tour, also featuring co-headliners DEF LEPPARD, along with POISON and JOAN JETT & THE BLACKHEARTS, kicked off on June 16 in Atlanta, Georgia and played on July 17 in Denver before the trek resumed with August 5 and 6 shows at Fenway Park in Boston.

Lee shared the full-frontal selfie on August 11, with the caption "Ooooopppsss". Within hours, Instagram and Facebook took it down for violating nudity rules.

Lee's graphic image, which showed the heavily tattooed musician naked while sitting on the edge of a tub, was up for at least four hours, which was described by one Twitter user as "an insane amount of time." This has led to an outcry against social media companies for applying what critics say is a double standard in platform guidelines that favor cisgender men.

"following tommy lee on nstagram is interesting enough but i- sigh. That was traumatizing. How is it still up," wrote a Twitter user who posted a meme of a person washing their eyes out with bleach. 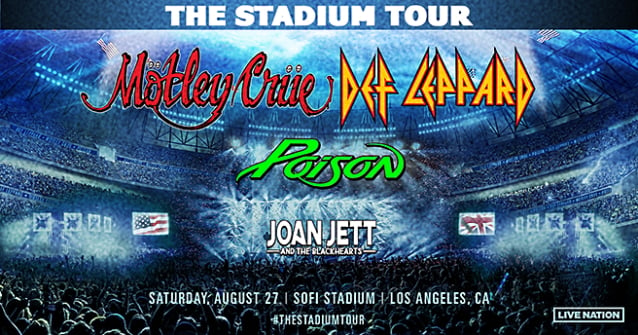