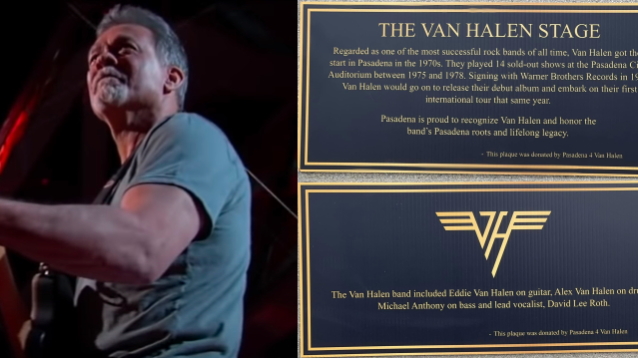 A ribbon-cutting ceremony for the Van Halen Stage at a new park in Eddie Van Halen's former hometown of Pasadena, California — the city where VAN HALEN formed 50 years ago — was held earlier today (Saturday, September 17). Video and photos of the event can be found below.

The park, which was named Playhouse Village Park at the urging of the late Councilmember John J. Kennedy, is located at 701 East Union Street (between El Molino Avenue and Oak Knoll Avenue). It has open space for informal recreation, relaxation, and community gatherings; children's playground with shade structures; public restrooms; a 48-space parking plaza; and a dog run.

The city held public outreach to solicit suggestions for the name of the new park, with the most popular suggestions being for Eddie Van Halen and science-fiction writer Octavia Butler. Eddie Van Halen Park received over 3,400 favorable responses in the survey, Octavia E. Butler Park got 526 favorable responses, and Playhouse Village Park and similar variations, including Playhouse Park, got 135, according to a tally reported jointly by the Planning and Community Development Department and the Parks, Recreation and Community Services Department. The Van Halen family then requested that the stage area be named for the entire VAN HALEN band instead of exclusively for Eddie Van Halen. The Commission then amended its recommendation on the naming of the stage to the Van Halen Stage.

A memorial honoring Eddie Van Halen in Pasadena was officially unveiled last October — a little over a year after his death. A plaque was presented near the city Convention Center, which is next to the Civic Auditorium, where VAN HALEN played a number of times between 1975 and 1978.

Long awaited Grand Opening of our neighborhood park and Van Halen Stage. Looking forward to bringing grandkids and their...

“Jump”ing for joy at the wonderful grand opening of the new Playhouse Village Park today with the Van Halen stage!...

Thank You Pasadena!!! We were absolutely delighted to see The Van Halen Stage dedicated this morning! And wowza, SO many Van Halen Fans there! We did it!!!#VanHalen#Pasadena@GregRenoff@shawnmpatterson@johnnybeane@VanHalenNews@ddunchained@BLABBERMOUTHNETpic.twitter.com/2SivFkMHey

Van Halen is getting a stage dedicated in their name in Pasadena this morning! Of course I’m here, bright & early!
#VanHalen #EdwardVanHalen #MammothWVH #Pasadena

Thank You Pasadena!!! We were absolutely delighted to see The Van Halen Stage dedicated this morning! And wowza, SO many Van Halen Fans there! We did it!!!

Just went to the ribbon cutting for the Van Halen stage at the newest park in Pasadena. Sadly, none of the surviving...