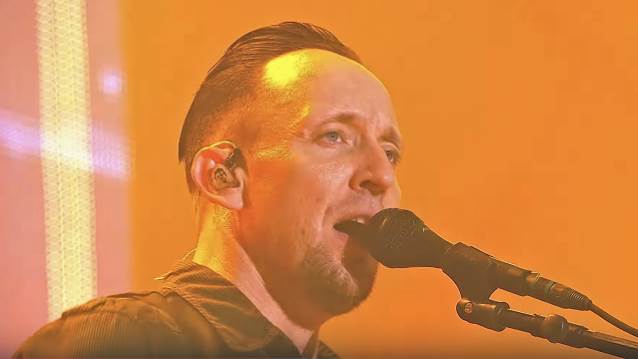 VOLBEAT dedicated the song "Seal The Deal" to Vinnie Paul Abbott during the band's July 13 concert at the Zwarte Cross festival in Lievelde, the Netherlands. Fan-filmed video footage of the performance can be seen below.

Vinnie passed away on June 22 at his home in Las Vegas at the age of 54. The PANTERA and HELLYEAH drummer's death "did not appear suspicious," according to the official police report. Sources close to Vinnie told the Las Vegas Review-Journal that he suffered a "major heart attack," but that information has not been corroborated yet by an official source.

Within a few hours of Vinnie Paul's passing, VOLBEAT frontman Michael Poulsen issued a statement via Facebook mourning his death. He wrote: "Today we sadly lost one of the great ones and a true sweetheart. Dear Vinnie, you were such a lovable guy and a friend with a big heart. Thanks for all the great moments together. Your company was always full of smiles. You will be missed by many. Love you, my friend."

In a 2014 interview with Legendary Rock Interviews, Vinnie Paul stated about VOLBEAT: "VOLBEAT took [HELLYEAH] out [in 2012] and that was probably one of my favorite tours I've ever been a part of. They treated us like gold and they were just an awesome band. Michael Poulsen is one of the most unique singers out there."

Vinnie Paul was buried on June 30 next to his brother, PANTERA guitarist "Dimebag" Darrell Abbott, and their mother, Carolyn, at Moore Memorial Gardens cemetery in Arlington, Texas. He was laid to rest in a custom "Kiss Kasket" provided by KISS members Gene Simmons and Paul Stanley as a gift to Vinnie's family. Vinnie was also buried in some of his trademark clothes, including his hat, shoes and flannel.

VOLBEAT will enter the studio in November to begin recording its next album for a 2019 release. The follow-up to 2016's "Seal The Deal & Let’s Boogie" will be the band's first full-length effort to feature bassist Kaspar Boye Larsen.