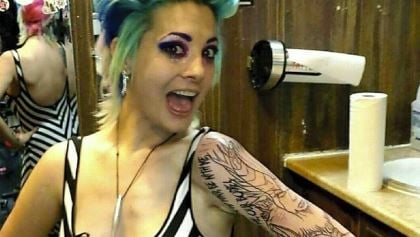 Tera Wray Static, the widow of STATIC-X frontman and founder Wayne Static, has paid tribute to her late husband with a sleeve tattoo that was apparently done at Strata Tattoo Lab in Yucca Valley, California. A couple of photos can be seen below.

The report, which was released in March, stated, "[Static's] wife stated that just prior to going to bed, he crushed one-half of a 30 mg oxycodone pill and consumed it. The oxycodone had been prescribed to his wife. He also drank an unknown amount of alcohol. His wife awoke at around 1530 hours. She found the decedent dead in the bed and called 911 at 1547 hours. Paramedics arrived and confirmed death at 1600 hours, noting rigor mortis and lividity."

The report added that Tera Wray told them that Static "took oxycodone, Xanax (alprazolam) and alcohol to relieve panic attacks."

She claimed that he took Xanax on a daily basis at the prescribed dosage, according to the report, and would "occasionally have his own prescription for oxycodone, but he would usually take hers."

Wray also told the coroner that she and Static "had a history of cocaine and ecstasy abuse, but they stopped using illicit drugs in 2009."

Static's mother also told the coroner that her son was a "self-admitted alcoholic" for whom drinking had been a problem for two years. Both his mother and Wray said that Static was "not suicidal."

Statements from both Wray and a publicist back in November dismissed rumors that his passing was the result of a drug overdose.

Static founded STATIC-X in 1994 and achieved commercial success with the band's 1999 debut, "Wisconsin Death Trip", which included the rock radio hit "Push It".

The group issued five more studio albums before disbanding permanently in June 2013. Static has been pursuing a solo career at the time of his death.

Check out Tera ' s Wayne tattoo. All of this was done on 1 sitting. Done by Jay 'e Jones